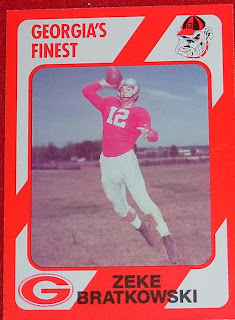 To be the SEC’s all-time leader in interceptions, you have to be the type of player who can forget about mistakes quickly. Illinois native Edmund “Zeke” Bratkowski was just that type of player. One of the first great passing quarterbacks in SEC history, Bratkowski led the Bulldog offense from 1951 through 1953. Bratkowski’s high school coach, Paul Shelby, had also coached Georgia legend Charley Trippi and felt Bratkowski was a perfect for Wally Butts’ system. Turns out, he was right.

Bratkowski became the starting quarterback for the Dawgs during his sophomore season in 1951. Zeke put up some decent numbers that year, completing 116 of 248 passes for 1578 yards and 6 touchdowns. Unfortunately, he also threw for a Georgia and SEC single season record 29 interceptions. This included a record 8 in the season ending game against Georgia Tech. Despite the high number of interceptions, Bratkowski was recognized for his fine play by being named to the All-SEC second team. He would enjoy a much better season in 1952 as Georgia would improve its record from 5-6 to 7-4. He was named a first team All-American by the coaches association while throwing for 1824 yards and 12 touchdowns. He was also named first team All-SEC. In his senior season of 1953, Zeke Bratkowski was named the Georgia captain and once again made the All-SEC squad. He threw for 1461 yards and 6 touchdowns and also led the nation in punting average (42.6 yards per punt). He was once again named an All-American, this time by Focus Magazine.

Zeke Bratkowski ended his career at Georgia as the NCAA’s all-time leader in passing yardage, a crown he held until 1961. For his career, he threw for 4,836 yards (still good for 6th all-time at Georgia), 24 touchdowns, and an SEC record 68 interceptions. He twice led the SEC passing yardage (1952, 1953), led the nation in passing yardage (1952) and led the nation in punting (1953). His career total of 4,854 yards of offense was an SEC record until it was broken almost 30 years later by Herschel Walker. Bratkowski was drafted in the second round of the NFL Draft by the Chicago Bears. He played in the NFL for 14 seasons with the Chicago Bears, Green Bay Packers, and Los Angeles Rams. He later coached under Vince Lombardi and has once again found his way back into the spotlight in recent days. In 2010, Bratkowski was brought in to help Florida quarterback Tim Tebow transform his throwing motion prior to the NFL Draft. 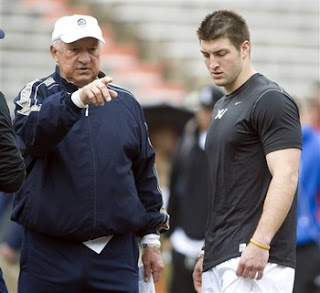 Bratkowski working with Tim Tebow in 2010

He can't be considered truly great if he's helping Tebow! (Great talent wise, yes, but not great UGA player would do that!)