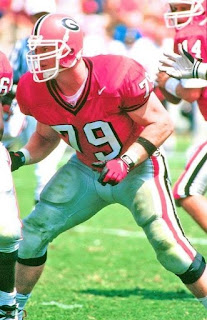 Along with younger brother Jon, Matt Stinchcomb makes up one half of the 2 pairs of brothers to appear on our countdown. After a great career at Parkview High School in Lilburn, matt decided to stay in state and attend The University of Georgia. This would be the beginning of a great relationship with Georgia, one that led to a Facebook campaign nominating him for the AD spot after the departure of Damon Evans.

After playing as a backup during his freshman season in 1995, Stinchcomb earned a starting spot on the line during his sophomore season in 1996. He would make 32 consecutive starts on the Georgia line over the next three seasons. In 1997, he earned first team All-SEC honors and was named an All-American by the American Football Coaches Association. Back for his senior season in 1998, Stinchcomb earned nearly every honor a lineman can obtain. He was a finalist for the Lombardi Award (given annually to the nation’s best lineman), first team all-SEC, and a consensus All-American (AFCA, Playboy, AP, Walter Camp, Sporting News). He was also an Academic All-American with a 3.96 GPA in business. For his efforts on the field and in the classroom, he was named the Woody Hayes National Scholar Athlete Award Winner.

He was selected as the 18th overall pick in the 1999 NFL Draft by the Oakland Raiders. He played for the Oakland Raiders and Tampa Bay Buccaneers for 8 seasons and retired following the 2006 season. In 2009, he was selected to the University of Georgia Circle of Honor and was recognized as an SEC legend during the SEC Championship weekend. He has partnered with former Dawg quarterback David Greene to put on the annual Countdown to Kickoff, which raises money for local charities. You can also see Matt Stinchcomb doing college football coverage for CSS and ESPN.
Posted by Streit at 12:24 PM