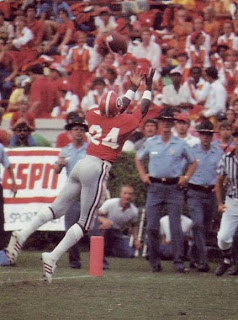 The one thing about natural talent is that even when you are having the worst season of your career, the next play could be the one that turns things around. That was the case for wide receiver Lindsay Scott leading up to the match up against Florida in 1980. With only 11 catches and no touchdowns coming in, Scott had become an afterthought in the Georgia offense dominated by freshman Herschel Walker. One play would change the perception of Scott’s career at Georgia and his play in the history of college football forever.


Lindsay Scot grew up in Jesup, Georgia, and enrolled at the university in the fall of 1978. His blazing speed made him an asset on both offense and special teams. He would earn SEC rookie of the years honors as he led Georgia in both receiving (36 catches for 484 yards and 2 scores) and kick-off returns (529 yards). The first signature play of his career came against LSU when he returned a kickoff a record-tying 99 yards for a touchdown. He continued to excel as both a returner and receiver during his sophomore season in 1979. He caught 34 passes for 512 yards and one touchdown to lead the Dawgs. He also led the team kickoff return yardage for the second year in a row, totaling 532 yards on a Georgia record 27 returns.


There was much anticipation for Scott to excel during his junior year in 1980. But Lindsay struggled to find his place in the Georgia offense and Amp Arnold had taken over as the favorite target of quarterback Buck Belue. But with the Dawgs trailing late in the fourth and Georgia near its own goal line, Scott broke free in the middle of the field. The rest is history:

After the game, Scott was quoted as saying, “I’ve forgotten what it’s like. I don’t even remember what it’s like to catch a touchdown pass.” Georgia would go on to win the national championship and Scott finished with the year with only 19 catches for 374 yards and one touchdown. But, my god, how important was that one score?

For as much as 1980 was a down year for Scott, 1981 was the opposite. During his senior season, Lindsay Scott would earn first team All-SEC honors and regain his crown as Georgia’s leading receiver. For the season, he tallied career high in receptions (42), yards (728), and touchdowns (6). In his final regular season game with Georgia, he made one final play to endear him to the Bulldog nation:

Lindsay Scott will forever be remembered for his fantastic play against Florida in 1980, but his whole career in Athens makes him a Georgia legend. He caught 131 passes (6th all-time) for 2,098 yards (5th all-time) and 10 touchdowns. His 52 career kickoff returns is second in school history and he had a total of 1,152 yards in returns. He was drafted thirteenth overall in the first round of the 1982 NFL Draft by the New Orleans Saints. He spent four years in the NFL, where he caught 69 passes for 864 yards and one touchdown.
Posted by Streit at 1:13 PM

I don't think I had ever noticed it in The Replay until now, but why was Lindsay split out but down in a 3-point stance?

I don't think I've seen that from a split receiver before