Where Are They Now: Georgia Pitcher Nathan Moreau

Most Georgia baseball fans will remember Nathan Moreau as a key member of the 2008 Georgia Diamond Dogs that came within one game of winning the College World Series. A three year starter for Coach Perno, Moreau made 42 starts during his Georgia career. Moreau compiled an 8-1 record during his freshman season in 2006 as the Dawgs advanced to the College World Series. He went 6-2 in 2007 and 4-4 in 2008 to finish his career with an 18-7 record. He was drafted by the Baltimore Orioles in the 11th round of the 2008 draft. 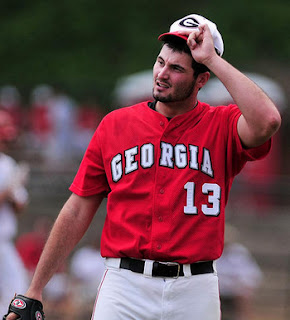 Moreau is now in his third year in the Orioles organization and recently earned a promotion to the Advanced-A Frederick Keys of the Carolina League. In his debut with the team on June 30, Moreau turned in an amazing performance. He tossed a no-hitter against against Salem, striking out 6 batters and walking. He nearly threw a perfect game, but two Frederick errors resulted in the only base runners of the night for Salem. 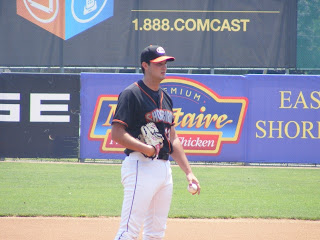 Moreau has continued to have success with Frederick since his no-hitter. In three starts, he is a perfect 3-0 with 1.89 ERA. He has struck out 12 batters and only walked 4. Hopefully, we'll see Nathan continue his success as he climbs his way towards the big leagues.
Posted by Streit at 9:58 AM

Labels: Minor League baseball, Nathan Moreau, Where Are They Now