53: Glynn Harrison, Tailback #25 (1972 – 1975)
Georgia’s rivalry with Georgia Tech has always had its share of players who grew up rooting for one school, but ultimately ended up playing for the other. Such was the case for Georgia running back Glynn Harrison. The graduate of Columbia High School grew up rooting for the Yellow Jackets and almost transferred back there during his sophomore season. Harrison played sparingly during his freshman year and almost transferred, but ultimately stuck it out. He played on special teams and occasionally in the backfield. During Georgia’s upset victory over Tennessee in November, Harrison would be involved in one of the most unusual plays in Georgia history.

With the Dawgs down 31-28 late in the 4th, quarterback Andy Johnson attempted to hand the ball off to Harrison but the exchange was flubbed. The fumbled ball took a funny hop, back into Johnson’s hands who took the ball into the end zone. Georgia won, 35-31, and Glynn Harrison had entered the Georgia history book. For the season, he was Georgia’s leading punt returner, returning 23 punts for 256 yards (11.1 yards per return).

Harrison would earn the starting tailback job in 1974 and made the Bulldog nation proud he had not left the program. Harrison led the Dawgs with 959 yards rushing on 149 carries and 4 touchdowns. Good enough for a gaudy 6.44 yards per carry. He continued his role as the teams punt returned, returning 19 punts for 110 yards. Harrison also earned first team All-SEC honors for the first time in his career. 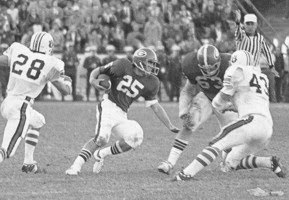 To prove that his yards per carry average in 1974 was not a fluke, he surpassed the mark during the 1975 season. The senior rushed for 894 yards on only 131 carries, good for 6.82 yards per carry (third best in Georgia history. He also scored 5 touchdowns and led the Dawgs in total offense for the second straight season. Harrison capped another All-SEC season with a great game against Georgia Tech that included a 78 yard touchdown run.

For his career, Harrison ranks second in Georgia history with an average of 6.37 yards per carry. He is 13th all-time in rushing at Georgia with 2,031 yards and he scored a total of 11 career touchdowns. He was drafted in the 9th round of the 1976 NFL Draft by the San Diego Chargers and ended up playing 1 season for the Kansas City Chiefs.