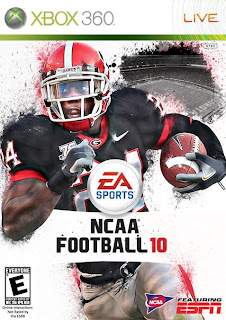 Today is one of the few days during the achingly slow summer months when college football fans get something new to digest and blog about: NCAA Football 2011 (sorry, I just couldn't use the '11 Tebow cover) is now on a store shelf near you. On this momentous day, the Washington Post also feels the need to remind you of the continuing legal struggle of former athletes over the use of their likeness.

Former UCLA basketball star Ed O’Bannon (great current profile), former Nebraska/Arizona State QB Sam Keller and other athletes have consolidated their lawsuits against the NCAA, Electronic Arts, et al, fighting for a piece of the monetary pie from the continued usage of their names/likeness/jerseys dating back to their college glory days.

I don’t have a law degree (yet), but wording from a 2009 University of Arizona athletic form makes it sound like a large part of the ex-athletes’ legal case isn’t the strongest (assuming it is a standard form, used for many years), as it gives the school the right to the athlete’s image "forever and throughout the universe, and to license others to use them, in any manner and in any and all media now known or hereafter discovered, for commercial purposes." (h/t above linked Fanhouse article).

Now, even though I will be attending law school this fall at one of our rival SEC schools, I don’t want to hammer on contract legalese. Everyone always throws out the gaudy revenue numbers that the major football programs generate, but an estimated 44 percent of major college football programs don’t generate enough revenue to cover their operating costs, forcing a rather large number of universities to directly subsidize their athletic programs. For football, 85 offsetting scholarships have to be budgeted/allotted to female athletes due to Title IX considerations before the players can even line up for a snap, and that’s before accounting for operating costs within the football program. In reality, a lot of the revenue dollars being fought over in the lawsuit just don't exist at the end of the process.

While I do appreciate the viewpoint of a current Oregon tight end weighing in on the issue, the reality is that the NCAA and its members will fight any sort of payments/trust fund/stipend setup to the bitter end, since any alteration in that will inevitably trigger a review by the IRS on whether the NCAA would still qualify as a tax-exempt amateur sports organization.

Shouldn’t we still be expecting that just about all of the NCAA athletes will be going pro in something other than sports?
Posted by Gov Milledge at 7:00 AM

Labels: Video Games, Where Are They Now