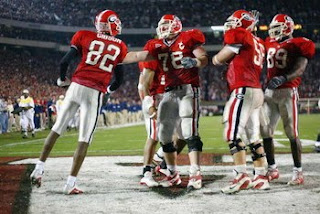 Parkview graduate Jon Stinchcomb was the second Stinchcomb brother to become an All-American lineman at the University of Georgia. Following in the footsteps of older brother Matt, Jon redshirted during the fall of 1998 and made his Georgia debut in 1999. Playing multiple positions across the offensive line for Jim Donnan, Stinchcomb earned both All-SEC Freshman and All-American Freshman team honors. In his sophomore season in 2000, he started all 12 games for the Dawgs and named to the SEC Coaches All-SEC second team.
After being named to Street and Smith’s preseason All-American squad, there were high expectations for Stinchcomb in the 2001 season. He had another great season, finishing with 18 pancake blocks for the season. His streak of 29 consecutive starts came to an end when he missed the Georgia Tech game with a knee injury. He was once again named second team All-SEC and returned for his senior season in 2002 as a pre-season All-American.
He was drafted in the second round of the 2003 NFL draft by the New Orleans Saints. Jon has enjoyed an All-Pro career and was a key member of the Super Bowl Championship squad in 2009.
Posted by Streit at 8:32 AM