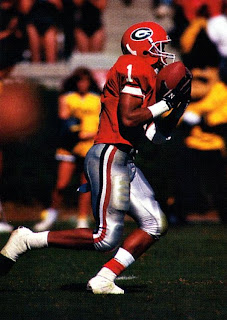 With the exception of Herschel Walker, Andre Hastings may have been the highest profile recruit in Georgia history. The Morrow native caught 184 passes for 3,196 yards and 43 touchdowns during his high school career and earned the title of USA Today High School Offensive Player of the Year for 1989. A fierce recruiting battle between Florida State, Notre Dame, and Georgia did not end on National Signing Day. The player that Sport Illustrated predicted would be an NFL All-Pro by 1995 ultimately chose to stay home, joining Garrison Hearst in a star studded class for second-year Coach Ray Goff.
During his freshman season in 1990, Hastings would get off to a great start for the Dawgs. The freshman caught 24 passes in a backup role, but made a much larger impact on special teams. Hastings took over the kick returner role for the Dawgs, averaging 28.1 yards per return (4th best single season average in Georgia history). This included 159 yards on only 3 returns against Kentucky.
In 1991, Hastings and Hearst would combine with new quarterback Eric Zeier to form an explosive offensive unit. He led the Dawgs in receiving in 1991, with 683 yards on 48 receptions. He was named to the All-SEC second team and returned for his junior season in 1992. As Garrison Hearst was making a run at the Heisman, Hastings continued to make big plays on offense and special teams. He totaled 860 yards on 52 catches that fall and was named first team All-SEC.
Hastings left for the NFL after the ’92 season, failing to meet the insanely lofty expectations that were placed upon him. For his career, 8th all-time at Georgia with 124 receptions. He averaged 15.1 yards per receptions (for a total of 1,876 yards) and 13 touchdowns. As a kickoff returner, he is Georgia’s all-time leader with a 25.5 average per return. He is 3rd all-time in yardage with 1,096 yards and scored 1 touchdown. He was drafted by the Pittsburgh Steelers in the 3rd round of the 1993 NFL Draft and spent a number of years in the league with the New Orleans Saints.
Posted by Streit at 7:23 PM