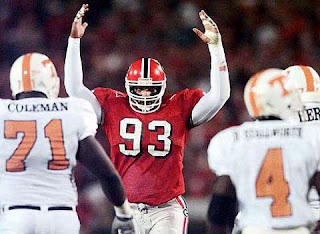 Richard Seymour player all four years at Georgia under Coach Jim Donnan in what may have been the most talented group of defensive linemen the Bulldogs have ever had. Playing alongside the likes of Marcus Stroud, Charles Grant, and Jonathan Sullivan, Seymour was a four year letterman that made 25 career starts at Georgia. The Hopkins, South Carolina native played sparingly during his freshman season in 1997 but finally cracked the top of Bulldogs depth chart in 1998.

Seymour made 4 starts during his sophomore season in ’98. He played in every game that fall, racking up 69 tackles, 4 interceptions, and 14 quarterback pressures. Seymour played a key role in Georgia’s come from behind victory over Virginia in the Peach Bowl. Fully entrenched as a starter for the 1999 season, he once again had a great year in Athens. Seymour led the team in tackles from his right defensive tackle position, tallying 74 total including 10 for a loss. He had 4 quarterback sacks, 7 quarterback pressures, and even had an interception. He was named to the first team All-SEC for the first time.

2000 was Richard’s final year at Georgia (it also marked the end of Coach Donnan’s career as well. He played a key role in the early season victory over Tennessee. For those of you don’t remember, this is what happened at the end of that game:

For the season, Seymour totaled 78 tackles, including 10.5 for a loss and 1.5 sacks. He was named to the first team All-SEC team for the second year in a row and was named a first team All-American.

For his Georgia career Seymour had 233 tackles, 10 sacks, and 26 tackles for a loss. He was drafted in the first round of the 2001 NFL Draft by the New England Patriots where he became a key member of the Patriots’ multiple Super Bowl victories. He has been a 5-time Pro Bowl selection and was named to the NFL’s 2000’s All Decade team. He was traded to the Oakland Raiders in 2009 and recently signed a one year contract that will pay him $12.4 million this fall.
Posted by Streit at 9:11 AM