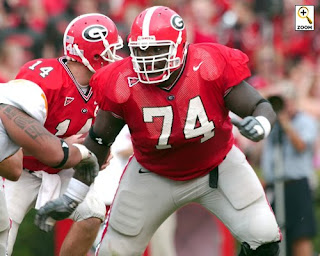 One of the top lineman in the country in 2001, Miami native Max Jean-Gilles was a great recruiting get from Florida during the early years of the Mark Richt era at Georgia. Gilles became an immediate contributor for the Dawgs in 2002. He played in every game that season for the SEC’s top scoring offense as Georgia won its first SEC Championship in 20 years. He made his first career start in the SEC Championship game against Arkansas and had an outstanding spring in 2003. After earning the Coffee County Hustle Award during spring practice, he earned a starting spot at right tackle.

In becoming Georgia’s most improved offensive player during the 2003 season, Jean-Gilles started all 14 games and registered 60 “dominator” blocks. He was to the All-SEC second team by the SEC Coaches and Honorable Mention by the Associated Press. In 2004, he moved positions from tackle to guard where would become an even more powerful force. A pre-season All-American candidate and an Outland Trophy Candidate, he once again earned second team All-SEC honors from the Associated Press and first team All-SEC honors from the coaches.

In 2005, he was named the permanent offensive captain of the team that earned a second SEC title in 4 years. Max was credited with 17 touchdown resulting blocks and allowed only ½ of a sack for the entire season. He was named first team All-SEC and first team All-American honors by multiple outlets. He finished his Georgia career with 40 career starts and never missed a game due to injury. His class won 44 games, one of the highest totals for a class in school history. He was drafted by the Philadelphia Eagles where he has continued his football career.
Posted by Streit at 7:46 PM

I remember seeing Max come thru the Dawgwalk for the first time (Clemson?) he was the only one who had his helmet on.

I knew then that his wallet said Bad MF.

That and he was wide enough for the team to have ridden him down Lumpkin . . .