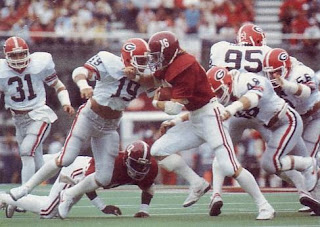 Replacing a legend is always a tough job and it was John Little’s job to take the place of Georgia great Terry Hoage. Little played quarterback in high school in Lynn Haven, Florida, and remained at the position during most of his redshirt season in 1982. In 1983, he moved to defense where he saw limited action during the first three games of the season. But injuries, including one to Terry Hoage, allowed Little to earn a starting spot on the defense. He started six games in ’83 and became a fixture in the Georgia secondary for the next three seasons.
Following Terry Hoage’s graduation, Little took over the position of rover for Georgia in 1984. Little played well, but his breakthrough performance came in the regular season finale against Georgia Tech. The Dawgs fell to the Yellow Jackets, 35 – 18, but Little had an amazing game totaling 25 tackles. This total still stands as the second most tackles recorded by a single player in one game at Georgia.
In 1985, Little took on another role for the Dawgs in addition to playing defense. He led the Dawgs in punt returns that season, returning 21 punts for 169 yards (average of 8 yards per return). He also turned in the greatest single game performance of his career. Against rival Clemson, Little picked off two Tiger passes in the fourth quarter to help secure a Georgia victory. He was named to the All-SEC squad and named an All-American by Football News following the season. His senior season was another successful one, as he once again was named first team All-SEC and an All-American by Football News and the Walter Camp foundation.
Playing with other Georgia greats such as Jeff Hipp, Knox Culpepper, and Jeff Sanchez, Little was not the most high profile of Georgia stars but definitely one of the most consistent. For his career, he had 381 total tackles, good for 7th on the all-time Georgia list. The two-time All-American also had 10 interceptions and broke up 18 passes. He completed his college career playing in the 1987 Senior Bowl.
Posted by Streit at 10:14 AM