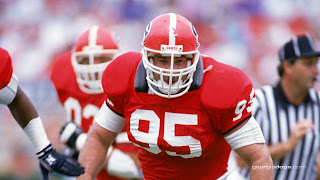 Before his days as a professional wrestler and television personality, Bill Goldberg was an excellent defensive lineman for University of Georgia Bulldogs. Goldberg, who hailed from Tulsa, Oklahoma, was recruited to Georgia during the final years of the Vince Dooley era.

A three year starter at Georgia, Bill Goldberg left a long list of accomplishments during his four years in Athens. He was a two time All-SEC selection and led Georgia in tackles in 1989. For his career, Goldberg had 348 total tackles (170 solo, 178 assists) which puts him 9th all-time in school history. He had 12 career sacks, good for 16th all time. Goldberg can be seen in action in the video below from the 1989 game against the Tennessee Volunteers:


Goldberg played in the Japan Bowl in 1990 and was drafted in the 11th round of the NFL Draft by the Los Angeles Rams. Goldberg ended up playing in the NFL for 3 seasons with the Atlanta Falcons, before injuries ended his career. Goldberg moved onto a career in wrestling. He was inducted into the National Jewish Sports Hall of Fame in 2010. 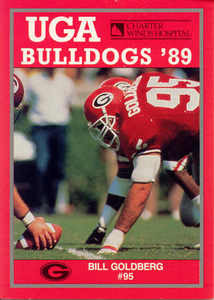 And while I never saw Goldberg play football in the Georgia Dome, I was there the night he defeated Hulk Hogan for the WCW Championship, as seen below. I have been to Falcons games, Olympic basketball games, and bowl games at the Dome, but I never heard a crowd louder than it was on this night: