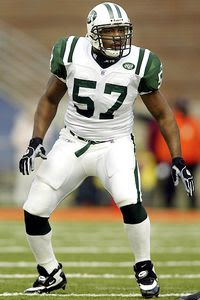 During the final years of Vince Dooley’s career, Atlanta native Mo Lewis began what would be an amazing football career. Lewis is considered to have one of the best NFL careers of any Georgia player, but his years in Athens were not too shabby either.
During his career in Athens, Lewis would rack up numbers that would put him near the top of many categories in the Georgia record book. His best season came during his junior season in 1989, when he had 10 sacks. This included a four sack game against Ole Miss. During his senior season, Lewis was named defensive captain and was named to the second team All-SEC squad by the Associated Press. He stands 12th all-time at Georgia in tackles with 314 (169 solo, 145 assists). He is 12th all-time in sacks with 14.
Lewis was drafted in the 3rd round of the 1991 NFL Draft by the New York Jets. During his thirteen year career in the NFL, Lewis was named to the Pro Bowl three times and was selected as an All-Pro twice. He retired with 1231 tackles (883 solo), 52.5 sacks, 14 interceptions for 241 yards, 79 pass deflections, 29 forced fumbles, 13 fumble recoveries for 74 yards, and 5 defensive touchdowns in 200 career games. Lewis is most famously remembered for the play below, which injured then Patriot quarterback Drew Bledsoe and paved the way for Tom Brady to become the new starter in New England:
Posted by Streit at 5:00 AM