89: Joel Parrish, Offensive Guard #67 (1973 – 1976)
Despite the graduation of Randy Johnson following the 1975 season, the Georgia Bulldogs returned a great offensive line for the 1976 season. Among the stars on that line, there was Mike “Moon Pie” Wilson and Joel Parrish. Parrish was from Douglas, Georgia, and was drafted to play baseball by the Los Angeles Dodgers out of high school. He ultimately decided to return to football and came back to Georgia in 1973.

In 1976, the Georgia Bulldogs would finish the regular season 10-1, winning the SEC and a trip to play Pittsburgh in the Sugar Bowl. Running back Kevin McLee and quarterback Ray Goff would combine for nearly 1800 yards rushing. Following the season, Parrish was named to the All-SEC team was award the most outstanding SEC lineman award by the Atlanta Touchdown Club. He was also one of four Georgia players to be named to various All-American squads. He would continue his football career in Canada, playing for the Toronto Argonauts. 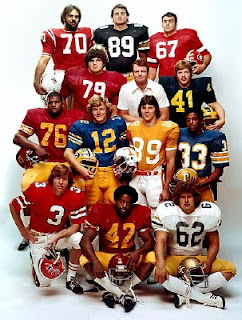