82: Dan Edwards, End #55 (1945 – 1947)
During an era where running was still the dominant form of offense in college football, Dan Edwards became a force catching passes. Edwards played in one of the most loaded backfields in Georgia history for a team that would go undefeated in 1946. The backfield included Charley Trippi and John Rauch as well as Herb St.John on the line. The Dawgs would complete a perfect season with a 20-10 victory over North Carolina in the Sugar Bowl. Edwards made the play of the game, catching a 66 yard touchdown pass from Charley Trippi that gave the Dawgs the lead in third quarter.
Edwards senior season in 1947 was not as successful as the 1946 campaign (Georgia finished 7-4-1) but Edwards put up one of Georgia’s best receiving seasons in the first half of the 20th Century. As team captain, Edwards caught 44 passes for 565 yards and 4 touchdowns. He capped off his amazing career with a 67-yard touchdown catch in the 1947 Gator Bowl. This play still holds the record for the longest passing play in a bowl game for Georgia. He was named to the All-SEC and All-American teams following the season. 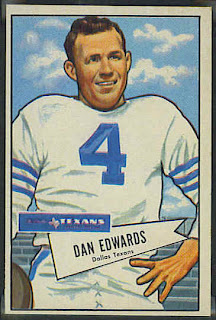 Dan Edwards was drafted ninth overall in the first round of the 1948 NFL draft by the Pittsburgh Steelers. He would play professionally for the next seven seasons in the NFL and the AAFC and was named first team All-Pro in 1950.
Posted by Streit at 7:00 AM