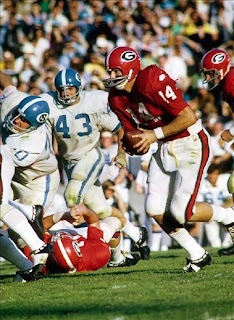 Andy Johnson, a Damn Good Dawg, is one of the true local legends of UGA Athletics. A 1970 Graduate of Athens High School, Andy excelled in both Baseball and Football and led the 1969 Trojans to the AAA GHSA Football Co-Championship against Valdosta High School. He wasted no time after sitting out his Freshman season due to NCAA eligibility rules, establishing himself as the starting QB in a run heavy offense by leading the 1971 Bulldogs to an 11-1 record. Johnson was the leading rusher on that squad with 870 yards and 13 touchdowns on 170 carries. Unfortunately, the 1972 and 1973 seasons did not equal the same success of 1971, but Andy Johnson was always on the Bulldog highlight film, finishing his career with 1,799 rushing yards/21 touchdowns and 1,603 passing yards that included 10 passing touchdowns.
I will always remember watching Andy Johnson run around the left side for a touchdown against Tennessee in the 1973 game while watching Munson's Greatest calls with my father in one of Larry Munson's first iconic calls. Andy was very well known for his great athleticism and toughness, endearing himself to the UGA fan base before enjoying a 9 year career as a running back for the New England Patriots. Johnson's football career ended in 1981 after suffering through knee injuries in 1977 and 1979. He still makes a home for himself and family in Athens, GA working in the Insurance Industry.
Posted by Bubba at 1:26 PM

Labels: Andy Johnson, Leonard Pope Punched Me in the Face, Quarterbacks, The Countdown 2010

Andy Johnson is a favorite of mine, although I'm too young to have seen him play. With family ties to Athens High School, I heard my fair share of references to him.