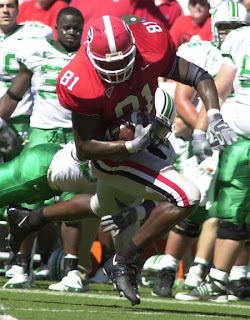 It has been very exciting to write this countdown and today, I have the privilege of not only writing about one of the finest Tight End's UGA has featured, but I get write about one of my hometown hero's and old friends, Leonard Pope. Leonard, like myself, was a graduate of Americus High School, where he led the AHS Panthers to consecutive AA State Championships in 2000 and 2001 playing TE and Free Safety. It made a lot of people very happy and proud to see Leonard commit to the University of Georgia, as our little Southwest Georgia town had not seen one of our own go to Athens to play Football in quite sometime. This pride only grew as Leonard's accomplishments grew, eventually becoming a Damn Good Dawg.
Leonard arrived at UGA in 2003 after spending one year at Hargrave Military Academy. He earned playing time as a Freshman, only catching one pass but was a physical mis-match with his 6' 8" frame and excellend speed. As the starting TE in 2004, his season started slowly and his breakout came in Jacksonville, catching David Greene's first two touchdown passes in the World's Largest Outdoor Cocktail party. Leonard didn't slow down after that, earning 1st Team All-SEC honors in both 2004 and 2005 by catching 64 passes for 1023 yards and 10 TD's over those two seasons. He bypassed his senior year of college, becoming a 3rd round draft choice of the Arizona Cardinals.
I've known Leonard since elementary school and it has been a pleasure to see him grow both on and off the field. It was always great to see him around campus at UGA and share stories with people at football games about his former exploits on both the basketball court and Finklea-Robinson Field from back home. His hard work and determination got him to UGA when many others would have quit, eventually becoming a major cog for the 2005 SEC Champions.
Posted by Bubba at 12:34 PM

Labels: All SEC, Leonard Pope Punched Me in the Face, The Countdown 2010, Tight Ends

HOW BOUT THEM DAWGS!