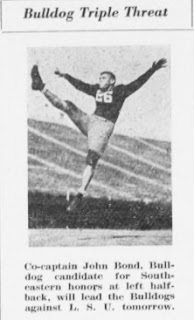 “There has been none who stood higher in character and sacrifice of self for his team and college." Atlanta Journal's Edwin Camp ("Ole Timer") on Bond.

John Bond, from Toccoa, GA, was both a kicker and a halfback for the Dawgs under Coach Mehre. He served as co-captain for the team in 1935 (the other captain was John McKnight, also from Toccoa) and led a class that went 21-9 from 1933-1935. One of his notable games as a kicker was a game against NC State where John kicked nine times for an average of 44 yards. During a game against Yale in 1934, The Red and Black declared that “especially effective was the punting of Bond, who was placing his kicks out of bounds with a great deal of skill and efficiency.” During his career he punted 113 times, with a 40.4 average during his Georgia career. In the halfback position, he totaled 1,097 yards on 257 carries.

In addition to being active on the in athletics (he also ran track), he was very involved in campus in organizations such as Sphinx and Gridiron. After he graduated, he went on to medical school and served as a surgeon in World War II. 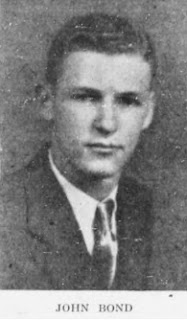 Bond was selected as an All-American in 1935, and he was inducted into Georgia Sports Hall of Fame in 1994.

*Today's entry on the countdown was written by Streit's wife, Melissa.