Randall Godfrey, LB #42 (1992-1995)
Randall Godfrey burst onto the scene as the SEC Freshman of the Year in 1992, Ray Goff's best season as Georgia's head coach (10-2). The Lowndes County High School product led the Bulldogs with 114 tackles that season, becoming the first true freshman to ever lead UGA in that category. He would go on to be named to the All-SEC team in 1993 and 1994 at middle linebacker.
Godfrey finished his career with 365 career tackles, 8th all-time in Georgia's history. His 231 primary career tackles makes him 3rd all-time on that list. 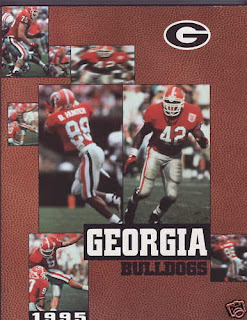 Injuries depleted this crop of Bulldogs in '95.

Falling 10 classes short of his degree when drafted by the Cowboys, Godfrey recently returned to Athens to finish it, doing so in the fall of 2009.
Posted by Earl at 8:58 AM