A little over a year ago I wrote this story about the myth surrounding the Cover Curse that had plagued athletes appearing on the cover of Sports Illustrated and the Madden Series of video games. We all know how that worked out for Dawgs in 2008 and already early into the fall of 2009, we have seen the curse rear its ugly head once again, this time taking down both the coverboys from SI and Madden. 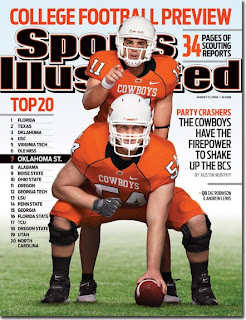 Oklahoma State appeared on the cover of the Sports Illustrated College Football Preview Issue as one of four teams that were considered programs on the rise. Another team appearing on the cover was the Oregon Ducks, who promptly dropped their season opener to Boise State. Oklahoma State however, lived up to the hype in their week one matchup with Dawgs. The victory coupled with Oklahoma's loss to BYU landed Oklahoma State back on the cover of SI following the first week of the college football season. 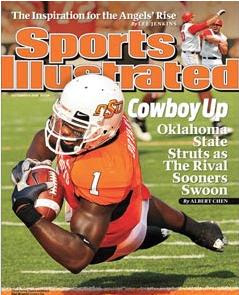 But this past Saturday, Oklahoma State was upset at home by the Houston Cougars. With Oklahoma rolling in week 2 and Sam Bradford making good progress, it looks like the Sooners will be back on top of the football world in Oklahoma pretty soon.

This year's version of Madden NFL had not one but two cover athletes, Larry Fitzgerald of the Arizona Cardinals and Troy Polamalu of the Pittsburgh Steelers. 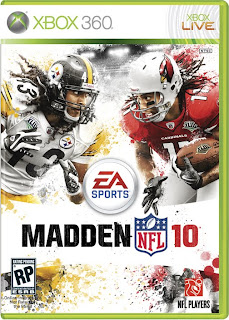 As defending world champions, the Steelers opened the 2009 NFL season on Thursday. Things were going well for Polamalu against the Tennessee Titans, with a couple of tackles for a loss and an interception. But before the night was over, he would injure his knee and will be out for the next few weeks.

If I am Matt Ryan or AJ Green, I pray that SI and Madden keep them off the covers of their products.
Posted by Streit at 10:18 PM

Don't forget about Crabtree on the cover of NCAA 10.

He's not even playing yet.