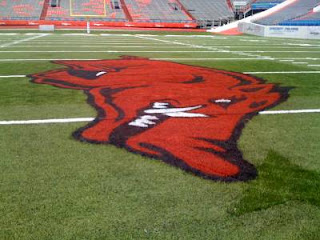 With all of the kickoff return yardage in last Saturday's UGA-South Carolina game, you'd think maybe we'd get a chance to catch our breath this coming Saturday against Arkansas. Not so...
Arkansas kick returner Dennis Johnson returned the opening kickoff of the season for a 91-yard touchdown vs. Missouri State two weeks ago. I'm sure this will lead our coaches to believe the freakin' corner kick is the way to go against the Razorbacks. We all know that the ONE time South Carolina put a nice return on the deep kickoff, the Dawgs went right back to directional kickoffs.
On the flip side, Arkansas is having trouble keeping the kickoff inbounds with kickers Alex Tejada and Cameron Bryan, spotting the ball on the 40-yard line twice for Missouri State, a problem that reared its ugly head for Arkansas last year.
It might turn out to be another interesting night on special teams.
On the Arkansas offensive side of the ball...
Thirteen (13) different Arkansas players caught passes vs. Missouri State for a school record 447 passing yards, with Jarius Wright leading them with 6 catches for 139 yards. Meanwhile, senior receiver London Crawford was injured vs. Missouri State and won't play on Saturday night. But with 13 different players making plays in the passing game, we'll see if Crawford's injury really matters.
And of course there's tight end D.J. Williams, one of the best in the SEC. And after what South Carolina's tight end did to the Dawgs last Saturday, Williams should be licking his chops.
Thank goodness for the return of defensive end Justin Houston. With Houston's knack to rush the passer and Arkansas quarterback Ryan Mallett's knack for being big, white and slow, the Dawgs could finally have some success getting to the quarterback. And hopefully Cornelius Washington will come along with Houston.
Senior running back Michael Smith is a really good one and a run-stuffing defensive end like Rod Battle will be missed, but both Jeff Owens and Geno Atkins are willing to play a little defensive end and Georgia has been able to stop the run.
Posted by Earl at 8:30 PM