Over the years, Earl and I have taken a number of trips to high school stadiums to check out future Dawgs in action. We've seen Caleb King run for nearly 280 yards and 4 TDs against Grayson, Washaun Ealey lead ECI past the semifinals in the Dome in 2007, and Christian Robinson man the linebacker position for GAC. But, out of any trip that we have taken over the years, the best experience we have ever had visiting a future Dawg was our fall 2007 trip to Cass High School in Cartersville, GA to see current Georgia running back Richard Samuel. 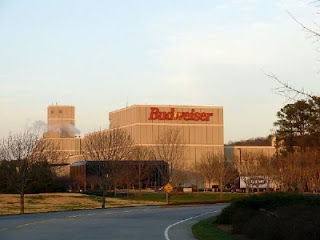 Cartersville is home to one of the largest Budweiser Breweries in the Southeast.

We arrived at the Cass High School stadium expecting a good game between the Cass Colonels and Calvin Johnson's high school team, the Sandy Creek Patriots. Samuel was being recruited as an athlete because he played both linebacker and halfback for Cass. We didn't have to wait long to see the talent that made him a five star recruit. Earl would describe Cass's first offense play of the game to a friend in an email a few weeks later:

"The best was the first play of the game for Cass, though, when he lined up at FB on an off-tackle play, and absolutely killed the LB. I have never seen a harder hit in a HS game in my life. We were confused when he lined up at FB, but holy hell. It was one of those, "Whoa", moments. I love football.

While Samuel was clearly the best player on the field, Sandy Creek was clearly the more dominant team. With Sandy Creek on the verge of going up 20 - 6, Samuel made what would simply be known as "The Play" amongst recruiting websites. On a short field goal attempt, Samuel jumped over the offensive line, blocked the field goal, and proceeded to go 97 yards the other way for a touchdown. You can check out the play here for yourself. 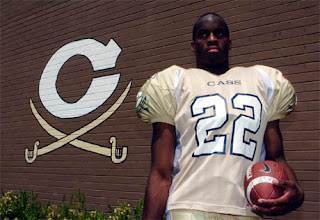 Samuel was clearly the best player on the field and he had just turned 16.

While the first half ended on an amazing play, the most memorable part of our trip to Cass High School took place during halftime. After Cass kicked the extra point and the teams left for the locker rooms, the Cass announcer came over the speaker.

"Ladies and gentlemen, keep your seats as tonight we announce the winner of our raffle contest. The winner of the raffle will take home the Cass High School Pygmy Goat!!!"

I'm not making this up.

As Earl and I looked at each other in amazement, out onto the field the walked a tiny goat with a little Cass blanket over its back. They were really giving away a goat as a raffle prize. The winner of the goat ended up being the principal at the local middle school. The announcer joked that if he did not claim his prize that night, someone would be over at his house at 6:00 AM the next morning to deliver him his new goat.

After the game, all the talk was about the potential for Samuel at linebacker and the ridiculousness of the Pygmy goat. We were shocked to hear the news that Samuel was being recruited as a halfback as opposed to a linebacker, but after this past weekend, we have seen where his hitting ability can come in handy. 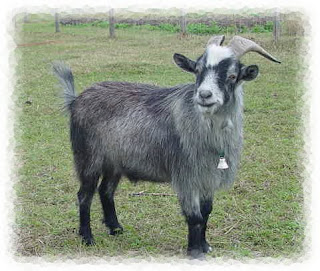 Let's hope we see many more of these at Bubba N' Earl this fall.
Posted by Streit at 9:02 PM

would I take home a goat like that? NAAAAAHHHHHHH!!! But i appreciate the story. Here's to Richard, more TD's and more goat stories.

That story's still funny, but that reads like "To Catch a Recruiting Predator," one of the first posts on this very blog. And we read like the predators...I do remember going to Cartersville, though. I don't remember Caleb King. I think that was Bubba with you on that one, Streit.

You are correct Earl, It was me at the Caleb and Ealey games.

Do those Pygmy goats taste better BBQ'ed or just roasted with vegetables?