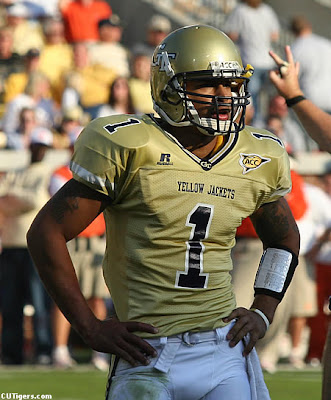 Reggie Ball met the Tech team at practice yesterday to give them some insight on their game this weekend against the Dawgs.

We're told Reggie threw a couple passes in practice with the team, but he ended up only throwing interceptions. This demoralized the entire team, so he decided to give them a pep talk.

We've obtained a recording of it, and here's the transcript:

Coach Johnson: "Alright men, I want you to listen to Reggie because he understands what this game means. While he never ended up graduating, never actually beat Georgia, and I'm sure he should be in Detroit washing Calvin Johnson's laundry, I'm sure he can give you some insight. Reggie, please don't screw up my team."

Reggie Ball: "Uh, thanks coach. I want you guys to know that this is a game of passion, which is something I completely lacked at all times in this rivalry. In fact, at one point I said this game wasn't that big of a deal. "

"That was a lie on my part. This game is actually the biggest deal of your lives here at this school. If you continue to lose to Georgia like I did, you'll probably hate yourself, have everyone lose respect for you, get kicked off the team because depression set in when you stopped going to class in September, and be reminded everyday by everyone in this state that you let those Dawgs dominate you. "

"I mean, these assholes are about to retire my number, and I played for the other team. You believe that? Just because I threw an interception in pretty much every game and always did it at a crucial moment to hand over the win, they think they can do that. "

"I don't want you guys to be like me. First, I want you to actually win. Second, I want you guys to remember that in big games like this, you probably shouldn't ignore your biggest playmakers. Throwing the ball or handing it off to every 3rd stringer you can find won't win you this game. Third, you need to go to class and not miss the ACC championship game because of academic ineligibility. "

"Just remember, you don't want to be like Reggie Ball. Actually win this game and you won't have to leave this state to avoid contemplating suicide on daily basis. Vacuuming Calvin's mansion is much better than being here after losing to the Dawgs. So, uh, go out there and make a claim to the prominence I never had!"

Paul Johnson: "That was the dumbest god damn speech I've ever heard. No wonder you couldn't graduate. Get the hell off of my field. We'll probably lose this game with the way you're demoralizing my players."
Posted by BulldawgJosh at 1:30 PM