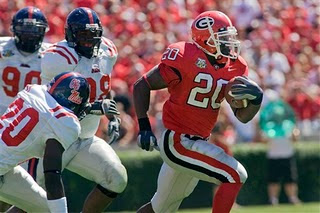 The last meeting between the Georgia Bulldogs and the Ole Miss Rebels was during the 2007 season. It was a game that showed the potential that would be realized down the stretch that year, but it was before the debacle that was the 2007 game in Knoxville. Interestingly enough, this game started out looking like it would be a Georgia loss.

Ole Miss already had a 7-0 lead when they drove to the Georgia one yard line. But before they could go in for the two score lead, a fumble by Ole Miss QB Seth Adams lead to a Georgia recovery. From there on, the game was all Georgia.

Many of us remember the great year that Knowshon Moreno had in 2007 and we often forget the accomplishments of then senior Thomas Brown. The Ole Miss game was arguably the best game of Brown's career, as he rushed for 180 yards and three touchdowns on only 16 carries. Add in 90 yards and touchdown from Knowshon Moreno and 43 yards from walk-on Kalvin Daniels, and the Dawgs finished with 328 yards rushing on the day. This was the first game under Coach Richt where the Dawgs rushed for over 300 yards.

After falling behind early, the Dawgs defense played solidly throughout the remainder of the game. They forced two turnovers (the fumble in the first quarter and later, a Brondon Miller interception) and held Ole Miss to single second half touchdown.

I'd love to see our running game get back to something like that.

Didn't TB get hurt in this game? I believe it happened on the last play in the video. Broke his collar bone, maybe?