The Brewing Hurricane in Coral Gables 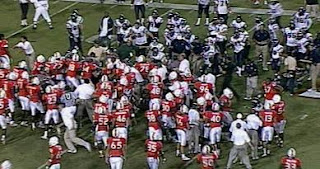 They probably were fighting over who got the yacht vs. the strip club that weekend.

The NCAA re-emphasized yesterday that the death penalty option is in fact still available for use:

"If that’s an option that the [NCAA] Committee on Infractions believes is appropriate in any one case — it doesn’t matter which one it is — I’m not opposed to them using that. We need to have penalties that serve as effective deterrents so that people who are doing the calculation in their head [as to] whether or not the risks and rewards line up, recognize the price of being caught.” -- NCAA President Mark Emmert

Forget the "atomic bomb" and "the results were so catastrophic that now we'll do anything to avoid dropping another one,” it's 2011 baby. Matt Hinton's musings are confirmed.

Private schools are not subject to states' Open Records or Sunshine laws, allowing an administration and athletic department to filter out even the most mundane information from the media. Private schools do not answer to state legislative subcommittees and are not forced to make an annual song-and-dance for state funding amidst budget cutbacks. The lack of information flowing out of a private university allows small problems to fester into big nasty problems (needing more than Bernie's ultimate problem solver), and the relative financial independence of a private institution results in an equally slow 180⁰ turnaround by not putting out$ide state funding on the line.

The detailed allegations span two coaching administrations, apparent knowledge by the coaches and administrators, and was largely overseen by an athletic director who also had a part in Miami's more recent football scandals, including a drug testing scandal and where 57 players falsified Pell Grant applications to the tune of $220k. Miami's program since its rise to national prominence in the 1980s has been built on a shaky foundation and indeed may be "broken beyond repair."

If I was an obnoxious "The U" singing-football fan, player-dropout, or alleged alum, I would be frightened. In my mind, the modern baseline for sanctions by the NCAA will probably begin with USC's recent sanctions, be flavored with a little bit of 1980s Kentucky basketball punishment, and garnished with everything just shy of a SMU penalty.
Posted by Gov Milledge at 1:20 PM

Labels: allegations, Near Death Experiences, The U

Miami fans aren't worried. Instead the one I've seen on sports boards posted a sign that said "snitches get stitches" that pretty much sums up the Miami fan base. The only bad thing about if they were to get the death penalty would be that the quality of player they attract would be forced to end up at some other school.