When Steve Greer arrived in Athens in the fall of 1966, few would have known it was the start of 33 year career in Georgia Athletics. Steve Greer, from Greer, SC, was an undersized defensive guard on Vince Dooley’s Georgia Bulldogs in the late 1960’s. He was a three year starter in Athens and Coach Dooley often called him the best pound for pound lineman he had ever seen.

Greer was a leader on the 1968 Bulldog team that won the SEC Championship. He played a crucial role in the Championship clinching game against the Ole Miss Rebels, intercepting two passing from Archie Manning in the 21-7 victory. Greer was named a permanent captain of the 1969 team, where he once again earned All-SEC honors and was named an All-American. 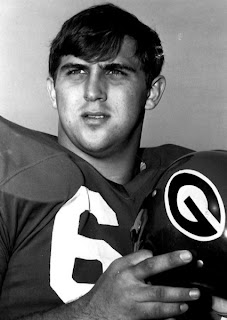 Greer worked as a graduate assistant at Georgia before taking a coaching job on Shug Jordan’s staff at Auburn in 1972. He returned to Georgia in 1978 as defensive end coach and recruiting coordinator. He was instrumental in helping bring Herschel Walker to Georgia and remained a member of the coaching staff until 1996. He then took over as the director of football operations, where he remained until 2009. Steve’s son Michael also played football for the Dawgs, catching a key 80 yard touchdown pass from Quincy Carter in the victory over Auburn in 1998.
Posted by Streit at 8:45 AM

Steve Greer was All American High School Middle Linebacker. He is an all American guy. He is liked by everyone that meets him. Gives new meaning to nice guy.