Lars Tate shared the Georgia backfield with some quality running mates. Rodney Hampton, Tim Worley, Keith Henderson and of course, Pulpwood. But none of those backs ran for more career yards than Tate. 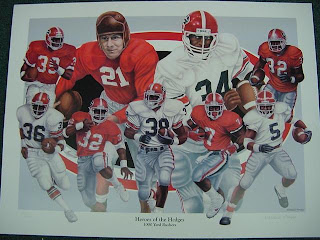 Lars Tate shared a backfield with #38 and #7.
The Indianapolis native left Athens with more than 3,000 yards rushing, which at the time was good for second place behind Herschel on Georgia's career rushing list. Tate still holds the #2 spot on UGA's career touchdown list with 36, thirteen behind Walker. The workhorse back of that mid-80s stable, Tate is also second all-time on Georgia's carries list with 615.

Named All-SEC as a junior, he posted 17 touchdowns in 1986, tying a then school record with four vs. Richmond - a feat he tied again vs. Oregon State the next season.

Lars garnered his second All-SEC team selection in 1987 as only one of two UGA seniors to ever rush for more than 1,000 yards, scampering for 1,016. Only senior tailback Willie McClendon of the 1978 Wonder Dawgs ran for more.

He was drafted 53rd overall by the Tampa Bay Buccaneers in 1988. Twenty one years later, his son Donovan beat him by 50 spots, being drafted 3rd overall in the 2009 MLB draft by the San Diego Padres.
Posted by Earl at 5:48 PM