Welcome to week two of College Football and the opening weekend for almost half of the Southeastern Conference. To recap last week, we went 9-2 with South Cackalacky (wow, N.C. State was bad) and Alabama proving me wrong as the two blemishes on the record. There are five games, excluding UGA, on the menu this week and without any further wait, here is what’s happening in your neck of the woods:

Troy at Florida: No real surprises in this one, just depends on what the Gator coaching staff wants work on in this scrimmage before Tennessee and the Kiffinator come to town on the 19th. Troy was especially bad last week in blowing a 14-0 lead against Bowling Green University, losing 31-14. Levi Brown has some experience at QB for Troy, but that isn’t saying a whole lot when you’re a Sunbelt team playing the Gators.

It is appropriate that Florida, and most of the SEC, plays Troy every year since they were founded as a teachers college. I’m glad that they have settled on the name Troy University and have stuck with it for the last few years, but it probably won’t be long before Southern Cal and the "Men of Troy" come along and sue for that as well.

Florida rolls 56-10 and this is the closest that Tim Tebow will be to a Trojan for quite some time. It’s a shame they don’t play Oregon State.

UCLA at Tennessee: A rematch of one of last season’s most surprising games, if Tennessee loses this one, they really have some issues. The best thing about this match up is that we get to put a picture of Rich Neuheisel on Bubba ‘N Earl for the first time of the year. 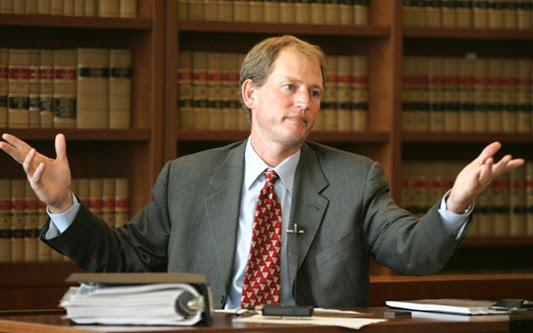 "Life is good, I get to coach football and run the UCLA NCAA Basketball Pool. Free admission this year."
The Kiffin experience looked rough the first 5 minutes of the game last week, but quickly got on track against Western Kentucky. Yes, Jonathan Crompton threw 5 touchdown passes, but he also threw 2 interceptions. If UCLA can get a little bit of pressure and frustrate JC, they may have a chance. However, Montario Hardesty and Brice Brown will get the ball a lot and I don’t think it will mater if Crompton has happy feet or not (at least not until next week in Gainesville). At home, UT wins 31-17.

Florida International at Alabama: Alabama looked like a Nick Saban coached team last Saturday against Virginia Tech and ground down a very fast and good defense in the 4th quarter. New QB Greg McElroy had a tough test for his first start and he really settled in as the game went on. Look for the Tide to play physically again this week and it won’t take nearly as long to grind down the hapless Panthers of FIU, Alabama waxes 49-7. 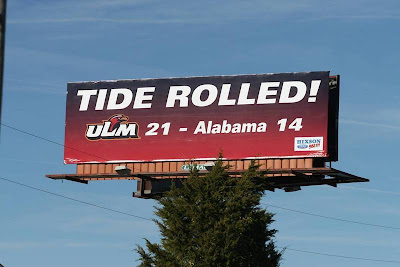 Beware the Sunbelt Bama. People don't forget.
Vanderbilt at LSU: The SEC opener for both squads, LSU is going to want to make a statement in this one after a close win at Washington where the Tiger D was abused for over 478 yards of total offense by the Huskies.

"Wow, Washington's QB is big. Can I buy one of those?"
The Commodores from Nashville had an easy time last weekend with Western Carolina and we don’t know a whole lot about them from that performance. New QB Larry Smith was efficient and he’s going to have to play the game of his life to keep Vandy in the game at Tiger Stadium. I’m not quite sold on this LSU team, but you can’t argue against the talent. While Vanderbilt will play hard for 4 quarters, look for LSU to easily control the line of scrimmage while big back Charles Scott has his first 100-yard game of the year. Louisiana State wins 31-14 and after the game Less (get it) Miles calls Snoop Dogg and says something about candy bars and Mad Hatters. You would drink too after seeing 5 total points scored in one game. It's like the Braves visited the Plains, but without the 5 runs.
This is an intriguing match-up for the weekend and will be a great test for both first year coaches. Both Gene Chizik and Dan Mullen had successful debuts last week, with the Tigers facing a tougher Sunbel.., I mean WAC, opponent in Louisiana Tech. However, for the Western Division Bulldogs, this is a completely different monster than Jackson State. It will be tough for the young QB’s of Mississippi State in this road night game and if Coach Chizik has proven something other than the fact he can lose games at Iowa State, it’s that he can coach a tough defense. Auburn rolls 24-10 making sure that Gene Chizik has a shot and doubling his pre-Auburn career win total next week.

That does it for this week, enjoy the weekend and hope to see you guys on North Campus in Athens Saturday.
Posted by Bubba at 11:04 AM

La Tech ain't in the Sunbelt

Sunbelt, WAC, I'm going to call it the WACBelt from now on.

Great SEC Review. I originally thought Troy would give the Gators a stronger showing. but, looks like their performance against Bowling Green dispell that. Good luck against SC. Looks like it will be a defensive battle.