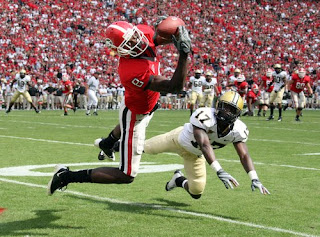 Jersey number of Georgia's star wide receiver AJ Green. Green was a freshman All-American, leading the SEC in receiving yards per game. AJ caught his first touchdown pass in his first collegiate game against Georgia Southern. That pass came from the man who will throw to him this season, Joe Cox.

Green would have his breakout game in the desert against Arizona State. Green caught 8 passes for 159 yards and a touchdown in the 27-10 victory. He would also haul in a long touchdown pass from Matthew Stafford in the 52-38 victory over LSU and score the game winning touchdowns in the fourth in the victories at Kentucky and Auburn.

The catch vs. ASU in which he simply rose up high into the air and snatched a ball that looked like it was sailing...

...man, it looked incredible from high in that ASU upper deck.