The Blasphemy That Is Fake Jerseys

Apparently we have been fooled all of these years, people. This is a brand new Joe Cox jersey: 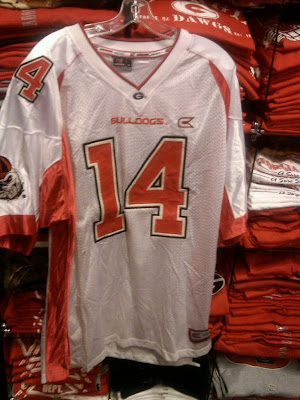 Now, we've all seen these before. They are the torment on human existence known as "fake," "rip-off," or "Wal-Mart" jerseys.

While I have always scoffed at these things, I never really looked at the prices. As I browsed through a store yesterday, this thing was so hideous that I just had to look to see how much people were burning on these awful things.

That is mindblowingly INSANE!

And, as Bill King points out, you can go to the UGA bookstore and get an official replica Stafford/Orson Charles jersey for $15!!! Regularly it is, you guessed it, $60.

Wal-Mart may sell them cheaper, but it can't be that much cheaper to force yourself to parade around in such a monstrosity. You can have the real thing (or what we consider to be), for not that much more! If you're going to a regular sports shop, apparently you are going to pay the same price!

This is just plain wrong.

When you see someone wearing one of these, remember to tell them they can avoid massive douchebaggery by not purchasing these awful things.

Go for the real (but still kinda fake) thing.
Posted by BulldawgJosh at 2:26 PM