Let me preface my comments by saying that I think the Heisman Trophy is a worthless award and that it has nothing to do with actually recognizing the best player in the country.

I would also like to say that Graham Harrell's exclusion as a nominee just further proves how worthless this entire charade is. I'm not saying he should win it, but how can a guy with overall better numbers which are than those of the three nominees and an 11-1 record at least not get a nomination?

The Gators still haven't let us forget that Teblowme won the Heisman last year. If he wins it again, I think the earth itself will melt from the obnoxiousness that will spew like lava from the state of Florida. 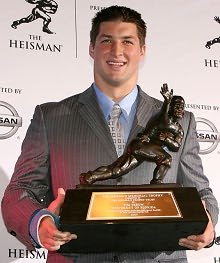 I hope he drops that damn thing on his toe...
If I had a vote, I would give it to Colt McCoy. Despite my hatred for him, it is hard to deny how solid Teblowme is, and it is hard to argue he isn't the best player. As David Hale points out, this article by Chris Low gives Teblowme a great case for winning. I almost want to change my decision and give it to Teblowme based upon this (almost).

At the end of the day, I think McCoy will come in third behind Teblowme and Bradford. Many of these same people ranked Oklahoma above Texas, so I don't believe they will rank McCoy above Bradford. Of course, maybe I'm using too much logic here and assuming too much.

In any event, here are everyone's opinions on who they would vote for, and who they actually think will win.

Earl would vote for: McCoy
Earl thinks will win: Teblowme

Streit would vote for: Bradford
Streit thinks will win: Teblowme

Bubba would vote for: McCoy
Bubba thinks will win: Teblowme

BFR would vote for: McCoy
BFR thinks will win: "I f***ing hate Florida"

Congrats to Colt McCoy. You have been awarded the "Bubba 'N Earl 'Our Heisman Is Better Than The Real One' Trophy" for 2008. 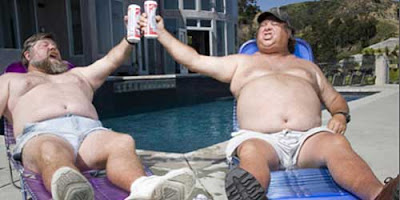 Unfortunately, none of us think you will win the real thing.

Damn you Florida. Damn you Teblowme.

Posted by BulldawgJosh at 2:40 PM

At least the "Best Haircut of our Era" didn't win.

I didn't see his speech, but at least it wasn't Tebow.