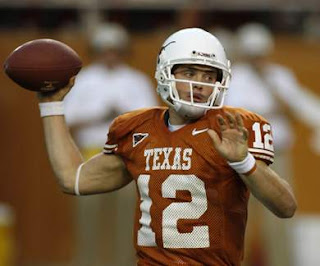 Colt McCoy has announced that he plans to return to Texas for his senior season. The Longhorns will have an experienced team which will most likely open the year in the top 5. Most writers and Georgia fans seem to think Matt Stafford will not follow McCoy's lead and instead will declare for the draft (where is is projected in many mock drafts as the #1 overall pick).

My question is: What affect does Stafford declaring for the NFL draft have on Georgia's preseason ranking for next season?

Please leave your thoughts in the comments section.

Even if the Dawgs lose in the bowl and 24/7 leaves, I don't see us being ranked outside of the top 15 next year. We return our entire O line, will most likely have a senior at QB (Cox) who has made some key plays in tough situations in the past.

No matter who stays or leaves, I think it will be good for the Dawgs to start outside of the top 5. It will take the pressure off an allow the team to build over the season. This year, the only way to go was down (and boy, sure did.)

My only comment is that you should study up and fully understand the difference between "affect" and "effect" before posting written word to the internet for all to view. Webster rests.

Auburn will be unranked, or depending on who we hire, demoted to FCS and replaced by USF.