Lewis Grizzard once wrote this about the Atlanta Falcons:

"The Falcons lost a game to the Chicago Bears 36-0 and the Falcons' coach blamed it on poor officiating. The Falcons have been big losers most every year they've been in Atlanta, and a man fell out of the stadium during a Falcons game once and was killed. I think he jumped after another Falcons' holding penalty." 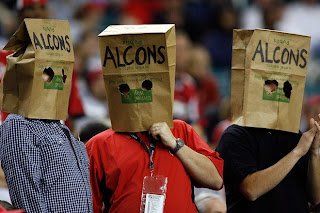 For many years, being a Falcons fan has been like a putting your hand against an electric fence, getting shocked and backing off, but going right back to touch the fence again. Every so often, it has looked like the franchise may be starting to turn things around. In 1998, the Falcons came from nowhere to go 14-2 and reach the Super Bowl. The team looked solid under Dan Reeves and it looked as though the futility might end. But when Jamal Anderson went down for the season with a knee injury, the 1999 Falcons once again found themselves with a losing record.

A few years later, with new coach Jim Mora, Jr. and star quarterback Michael Vick, the Falcons won the NFC South and made it to the NFC Championship game. But over the next two seasons, the Falcons would go 8-8 and 7-9 and Mora was eventually fired. Bobby Petrino was brought in as the new coach, but suddenly dog fighting charges appeared for Michael Vick. With the team in disarray, the 2007 Falcons stumbled to a 4-12 record that included Petrino quiting on the team midway through the season. Coming into the 2008 season, most experts predicted only 2 or 3 wins for the Atlanta franchise that has never had back to back winning seasons. 14 games later, the future of the Falcons looks bright as the team sits at 9-5 and in the middle of the NFC playoff hunt.

Falcons' owner Arthur Blank wanted to change the image of his team and he brought in Thomas Dimitroff from the New England Patriots to help. They cut a number of veteran players who were cancers to the team (Alge Crumpler, Deangelo Hall) as well as some good guys who were just past their prime (Warrick Dunn and Rod Coleman). They then brought in Mike Smith from the Jacksonville Jaguars and signed free agent running back Michael Turner. But the biggest decision was the drafting of quarterback Matt Ryan, who was taken over Glenn Dorsey at the third overall pick. Throughout the 2008 season, these Falcons have shown that they are different from the Falcon teams of the past. They have built a solid foundation of young players mixed with some key veterans to form a team that is already making the days of Michael Vick seem long ago. The team pulled off an amazing victory over the Chicago Bears when, down 1 point with only 12 seconds on the clock, they received a kick-off, completed a long pass, and kicked a game winning field goal to steal a victory. They have dominated weak teams (Oakland) and defeated others in hostile environments (winning on the road in Green Bay and San Diego). The difference in this Falcons team and those of years past is HEART.

The decision to draft Matt Ryan may be looked at as one of the best draft day decisions of recent memory. Ryan is the front runner for the rookie of the year, an MVP candidate, and has replaced the hated Vick as the new face of the franchise. Michael Turner has shed his role as LT's backup and proven his worth as an every down player. Coach Mike Smith has led a team picked to finish dead last in the conference to a winning record. The future is bright for the Falcons.
Posted by Streit at 8:00 PM

Yep, the Falcons have definitely surprised me this year. Now if we could only get rid of that bum Keith Brooking and replace him with a competent Linebacker (who doesn't look like Joey Fatone) we might be in good shape!