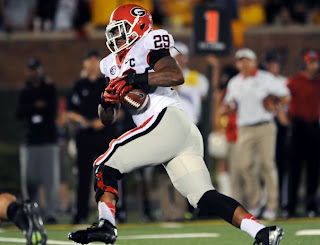 Photo Courtesy of AJC.com
What a great night for the Dawg Nation!  If this man does not start appearing on Heisman watch lists, it will truly be a travesty.  First, let's take a look at how I did in this week's wishlist:

Overall, amazing execution against very tough odds by the Dawgs tonight.  A couple of other notes:

Well, technically, our first TD was set up by a perfectly called and executed wide receiver screen to TK.

Also, we had a TD drive extended by a personal foul late hit call on Sheldon "Old Man" Richardson.

Great predictions, including the final score! After all, nobody can account for Mr. Jarvis Jones.