Another Reason to Hate Soccer: The Vuvuzela

As a Georgia fan, I hate anything remotely related to the Georgia Tech Yellow Jackets. This includes the annoying buzz sound that the Nerds like to make. Does it sound really stupid? YES. But does that make it any less annoying? NO.

So, it was an unfortunate surprise to find out that Georgia Tech fans had infiltrated the World Cup and taught everyone their mating call. Or so I thought. Come to find out, the annoying noise you hear during World Cup games comes from this: 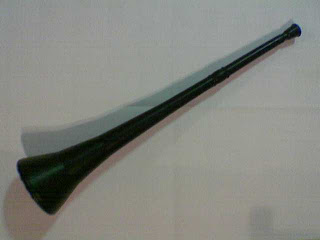 This is a vuvuzela, or more commonly known as a stadium horn. These instruments have been played traditionally at soccer games in South Africa and have been introduced to the world this summer. Like it or hate it, these things will be coming to American sports arenas over the coming months. The Florida Marlins ran a promotion last week giving away modified versions of these things. The noise was so loud (despite a typical small Marlins crowd) that Marlins manager Fredi Gonzalez and the umpire had a miscommunication on a double switch. The Marlins ended up losing the game and Gonzalez has now lost his job.

SEC football stadiums are loud. Our fans are passionate about the teams we support and, when combined with a days worth of tailgaiting and drinking, can often make enough noise to register as an earthquake (see LSU at night). Do we need another way to make the crowds louder? No. But apparently, the SEC does not plan to stop fans from bringing these instruments into games. From the SEC's statement:

The vuvuzela, along with any artificial noisemaker, will fall under the revamped guidelines of the Mississippi State cowbell, according to SEC associate commissioner Charles Bloom. Fans are only allowed to use the cowbells (or vuvuzelas) during pregame, between quarters, halftime, timeouts, after scores and during possession changes.

Yeah, we'll see how that flies at LSU. You want to be the person who tries to wrestle a vuvuzela away from a Cajun who has polished off a fifth of Jim beam for playing his noise maker during an Alabama possession? BE MY GUEST.

Once again, soccer is trying to upset the peaceful order of things in sports in this country. Football fans are rowdy because they are passionate and drunk, not because of damn noise makers. Soccer, take your "beautiful game" and annoying noise makers away, and leave football alone!

Amen to that! And they can take their third world sports back to the third world where the herdsmen enjoy kicking goat skins from one end of a sand pit to another.