74: Royce Smith, Offensive Guard #66 (1969 – 1971)
“Savannah's proud of this young man,
We honor here tonight,
Who's famous now from Rabun Gap,
Right down to Tybee Light.
“In years to come when he looks back,
And thinks about this day,
Royce will know we honored him,
Because he led the way.”
These words appeared in a poem by Daivd Barrow honoring Garden City native Royce Smith on Royce Smith Day in Savannah in 1972. Smith attended Groves High School where he was recruited by Georgia assistant coach John Donaldson. Smith arrived in Athens undersized for an offensive lineman at only 190 pounds. But after committing to a weight lifting program, Smith was up to 250 during the following three seasons as a start on the Georgia line. 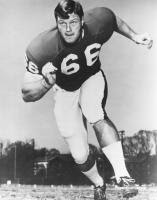 Smith enjoyed fine seasons in 1969 and 1970, as he earned All-SEC honors for his play at guard. In 1971, Smith anchored the Georgia line that would help the team finish 10-1 and ended the season with a victory over North Carolina in the Gator Bowl. He was named a consensus All-American and All-SEC and played in the Senior Bowl in 1972.
He was drafted in the first round of the 1972 NFL Draft by the New Orleans Saints. He would later return home to Georgia, where he spent two seasons with the Atlanta Falcons. He was inducted into the Georgia Sports Hall of Fame in 1995.
Posted by Streit at 8:42 AM