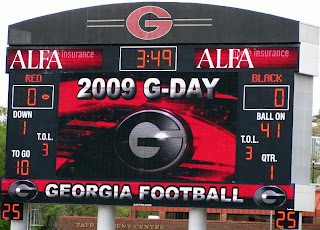 G-Day 2009 took place in Athens this past Saturday and the Bubba 'N Earl crew made the trek up 316 to take in the game. The weather cooperate this year and it was absolutely gorgeous day in the Georgia foothills. A large crowd (I would guess around 35,000) turned out for the game that was being televised by ESPN. 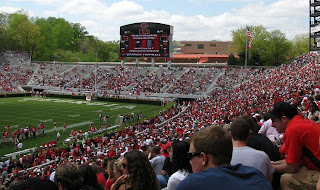 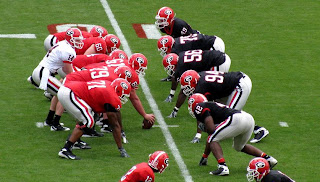 As for the action on the field, the game itself was pretty boring. A few turnovers, dropped passes, and bad blocking marred the action. There were however a few highlights. Here are some observations I had from the game:

1. AJ Green is still a beast. A great catch on the first play of the game and another almost amazing catch down the sidelines. Plus, he got into a shoving match with #2 (I think it was Brandon Boykin), which provided the most excitement of the entire game. 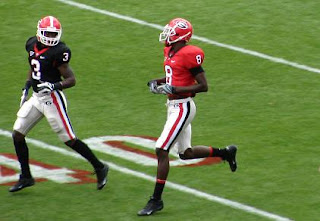 2. Logan Gray was impressive. He had nice zip on the ball and moved around well in the pocket. 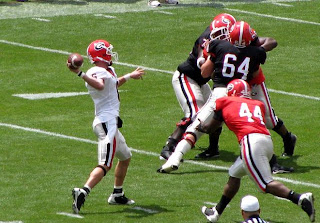 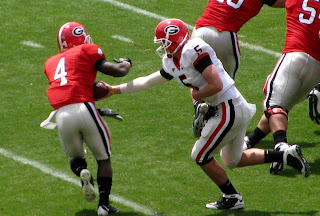 4. Blair Walsh nailed a 51 yard field goal. Granted, there was no rush but it is still nice to see him make one from that long.

5. Justin Houston and Geno Atkins looked great. Both were constantly in the backfield making plays. I also liked the defense in the 3-4, with Gamble coming off the edge.

Overall, a pretty dull game with only one touchdown scored in the game's final seconds. Final score was Red 13, Black 3. Here some other shots, including Joe Cox to Carlton Thomas, UGA VII, Aaron Murray, and Matt Sattford as a coach. 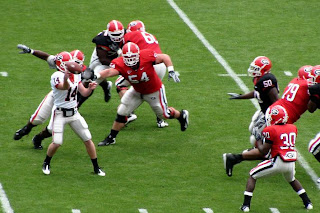 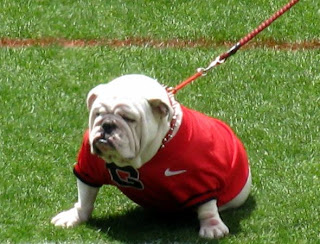 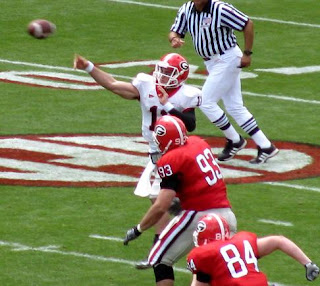 One last thing, there was a walking Subway sandwich on the field. We thought it was a taco at first. 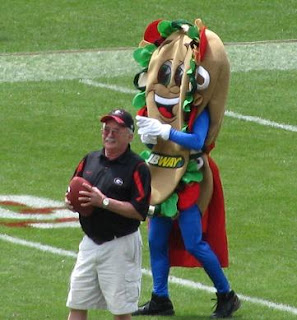 ***Thanks to my brother-in-law, Mike David, for the great pictures
Posted by Streit at 8:27 AM

all i have to say about the TV coverage... at least they didn't have paul maguire and rachel nichols on-site.

also, why did ESPN interview colt mccoy during the middle of the game?

I guess because he was Heisman finalist and they are trying to hype up this "Tebow vs. McCoy vs. Bradford" race for the Heisman even more than they did last season. Plus, Texas will be a top 5 team to open the season next year.

ESPN is airing Bama's spring game this weekend. I wouldn't be surprised to see ole Timmy on that broadcast.