"Who's that coming down the track?"
This is a constant cheer heard in Athens on Saturdays in the fall. As Georgia fans, we know the only appropriate end to the series of words that follows there are, "Ain't nothing finer in the land than a drunk, obnoxious Georgia Fan!" As often as this chant is heard, there are some others that have seem to fall behind and are rarely, if ever heard.
The first typically makes an appearance during Homecoming weekend. When the Alumni cheerleaders take the field, this cheer is usually broken out: 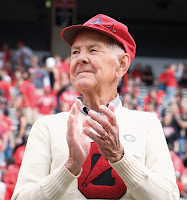 "Red and black and silver britches,

If these old guys are saying it, there is no reason Dawgs fans of today should not be saying it.

The second one is often heard, but rarely the entire cheer. Every Georgia fan who hates the Gators wants the world to know it, and i can't think of a better way to say it than this:

With your bright orange shirts ,

And your sissy blue britches ,

You can go to Hell you sons of bitches.

Come this fall, when we get revenge on Florida for the loss in '08, i know exactly what song I'll be singing.

Labels: Suck it Florida, Things that Bug Me, Traditions

As a member of the Redcoat Band, I can tell you two things. One, nothing is more annoying than the whole drunk obnoxious bulldog fan bit. Every year we work our butts off in band camp and practice precisely to earn the right to march down that track and scream that chant...correctly. So it is with love in my heart that I say to the bulldog nation, get the damn words right. There's nothing finer in the land, than the Georgia Redcoat Marching Band. Two, I would tell you that the gators cheer is what we call the florida song, which we sing every year at every basketball and football game we attend.

I think drunk obnoxious Georgia fan is WAY better than redcoat in the marching band.

the latter being pretty gay.

Ain't nothing finer in the land, than the Georgia Redcoat Band-geek Pep Squad. Hooray! Woopee!

Get it right or pay the price. Don't mess with traditions.

Hey guys, quit banging on the Redcoats. They work very hard to support the team and represent the Red and Black. Go Dawgs!

For the record, I have never said anything bad about the Redcoats. However, I do prefer the "Drunk obnoxious Georgia Fan" ending. I appreciate the band and they are a very large part of the great game day experience we have at Georgia.

i seriously doubt the "right way" has used the Georgia Redcoat band as the ending. at one point in recent history, our band was actually the Dixie Redcoats.

any sense of tradition with those lyrics, if they in fact did refer to the band to begin with, flew out the window when the band's name changed.

The way i see it is,1) If it wasnt for the "DRUNK" fans then who would you perform your music too? 2) The band gets your blood pumping red,silver,and black! So i personally think you both should realize that you do in a dysfunctional way kinda need each other!! So stop barking, save it for Fla. ;-/