Who is the Greatest Receiver in Georgia History?

Chip Towers of the AJC recently asked the question, "Who is the greatest QB in Georgia History?" David Greene was the winner of the online poll in a landslide. I thought it would be interesting to see who Dawg fans feel is the greatest receiver in Georgia history. Here is a brief look at some of the candidates:
Charley Whittemore (1968-1970)
Led the Bulldogs in receiving for three years in a row, Whittemore was a great receiver during a time when Georgia ran for more yards than it passed for. During his three year career, Whittemore had 114 receptions for 1,680 yards and 11 touchdowns. Those numbers are good enough for 11th all time in receptions, 10th in yards, and 11th in touchdowns.
Lindsay Scott (1978 -1981)
Scott and Amp Arnold were the main targets for Buck Belue during his career at Georgia. Lindsay Scott led the Dawgs in receiving in three of his four years on campus. For his career, he had 131 receptions (7th all-time) for 2,098 yards (5th all-time). Of course, Lindsay Scott is most fondly remembered for this play, the greatest play in Georgia football history:
Hines Ward -(1995 -1997) 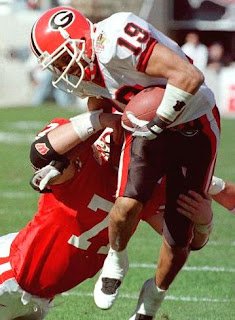 By far the most successful Georgia wide receiver at the NFL level, Hines Ward played not only receiver but also running back and quarterback while in Athens. His career total of 3,870 all-purpose yards is second all-time in Bulldog history to only Herschel Walker. He was the Dawgs leading receiver 1996 and 1997 and for his career had 144 receptions for 1,965 yards and 12 touchdowns. He was named to the All-SEC team his final season in 1997 with 55 receptions and 6 touchdowns.

Terrence Edwards (1999 - 2002)
Terrence Edwards completed his Georgia career with an SEC Championship season in 2002. He left the Dawgs as the SEC's all-tme leading receiver (though he was later passed by Vanderbilt's Earl Bennett). For his career, Edwards had 204 receptions for 3,093 yards and 30 touchdowns (all Georgia records). He is remembered for some amazing plays (such as the one below) but also remembered for the key drop for what would have been a game-tying touchdown against Florida in 2002. Edwards has gone on to have a successful career in the Canadian Football League. 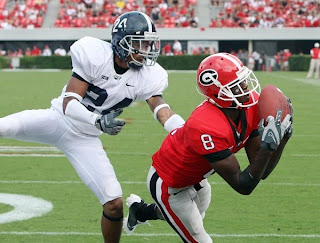 After only his freshman season at Georgia, Green is well on his way to becoming a Georgia legend. In 2008, Green led the SEC in receiving yards (963) and in receiving touchdowns (8). He finished 5th in the league with 56 receptions and was named to the All-SEC team and the Freshman All-American team. With senior Mohamed Massaquoi and his 58 receptions and 8 touchdowns gone, Green will be the main target for the Bulldogs in 2009.

I know there are many others that could be included in this list, such as Andre Hastings and Brice Hunter, but I wanted to keep the list to five. Please take our poll and leave your thoughts in the comments section.
GO DAWGS!!!
Posted by Streit at 1:00 PM

Totally not the question you're asking, but NOBODY in Georgia history mastered the play fake like David Greene. I don't care what your opinion of him is as a QB, you cannot deny that he sold a play fake like no one else at UGA & arguably at the collegiate level.

I'm a huge Stafford fan, but even he wasn't close to mastering that play fake like David did.

Damn I love watching that clip. Thanks for that today!

I don't know what you are thinking, Thad Parker was way underrated. He was lightning in a bottle when he took over for Champ Bailey on those trademark Donnan Tunnel Screens.

In all seriousness, Hines Ward may be my all-time favorite Bulldawg, but I have to go with Lindsay Scott. He had 2000 yards receiving in his career while playing on Dooley coached teams that featured Willie McClendon and some guy named Herschel.

Brice had one of the toughest plays in UGA history when he took on gamecock defenders after losing his helmet to a viscious hit. (God rest his soul)

But Hines gets my vote, despite the fact that he was used for his versatility at different positions. Great receiver, great Dawg.

And ditto what Ally said about the play fake. I've said before that Weinke performed the best play fake I had seen from the back of his own end zone against Clempson several years back...until that one by Greene.

Who could forget Corey Allen's catch on the goalline down on the Plains in '96. I know I can't.

But, the greatest Georgia WR of all-time was little used Damon Evans!

In my opinion, Andre Hastings should get some consideration...a great return man too.

Appleby to Washington baby! Thinking of Montreal and the Olympics!

Damon Evans? How many did he catch in his entire career? About 12?

Where is Andre Hastings??