Dawgs Start the Season Off Right

The Georgia Bulldogs baseball team opened the season Friday night before an opening day record crowd of 3,044. The crowd, the bats of Georgia, and their own errors on defense proved to be too much for the Penguins of Youngstown State as the Dawgs won easily, 15-2. The pitching was solid for Georgia, as starter Trevor Holder went 5 innings giving up 2 runs and picking up the victory. The combination Cecil Tanner, Justin Earls, and Dean Weaver held the Penguins scoreless over the last four innings. 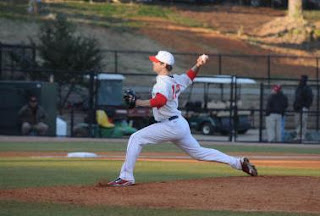 Equally up to the challenge were the Diamond Dawgs bats as they pounded out 17 hits. Every starter in the Bulldog lineup had at least 1 hit. Senior catcher Bryce Massanari had 3 hits and scored 3 runs, but the real story was the Georgia freshmen. Georgia started 5 freshmen in their lineup and the newcomers lived up to their billing. LF Jonathan Taylor reached base 4 times including 2 hits, a run scored, and 2 RBIs; 3B Colby May had 2 hits including a 2 run homer in the third inning; 2B Levi Hyams had a hit and scored two runs; and CF Zach Cone had 2 hits, scored a run, and had 2 RBIs. 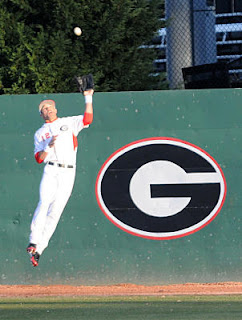 Cone also made this fantastic play in center

Overall, it was a great way for the Dawgs to kick off the 2009 season. The series continues with two more games against Youngstown State this weekend. Next week, the Dawgs will travel to Arizona to take on the highly ranked Wildcats.