THIS IS JUST ONE REASON WHY A PLAYOFF WOULD BLOW 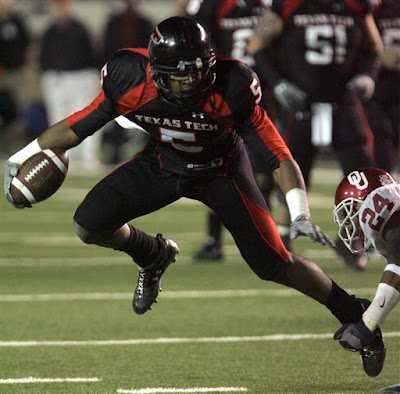 Texas Tech is on the verge of destiny. A school relegated to back seat of football in the State of Texas has one more large leap to make before they legitimize their run to the national title (with Baylor and the Big 12 Championship still left on their journey).

If Texas Tech wins this game, and then wins out, they've gone over the hurdles of a rigorous schedule that is probably only topped by a one or two SEC teams.

Not only would running the table this year be a landmark event for a program that managed to only win two SWC titles in 40 years, but it signifies that they are indeed one of the two teams that deserves to play for a national title.

T-Tech beating Oklahoma in Norman means they've completed a sweep of their major divisional foes, which is something that the traditional dominant teams in their conference couldn't accomplish this year.

Why would it then make sense to force this team to play even more games in a playoff, just to prove they're worthy?

Winning out with their schedule is enough of an accomplishment to have a shot at the title and a playoff only diminishes the potential achievement this team can gain tomorrow night.

This game, as well as their previous games against Texas and Oklahoma State, would have a diminished value if a playoff were in place. You could say T-Tech would benefit by still having shot if they lost this game and could still make a playoff.

While potentially true, that only gives evidence to my point that the importance of this game is diminished by a playoff. It also shows how pointless a playoff would be if T-Tech won. With a playoff, they would still have to prove themselves for several more games, despite winning against Oklahoma. With the current system, they can simply lock up their division and ensure they're shot by winning this game. The reason they can do that is because they've already proven themselves on the field in their previous games.

The game tomorrow night displays the essence of college football that so many seem to be forgetting (or just ignoring).

Good luck to the Yosemite Sams against the land thiefs.
Posted by BulldawgJosh at 4:32 PM