Injuries...Can it get any worse?

I found out this morning that Tony Wilson will now miss the remainder of the season. While on paper this may seem like a minimal loss, but Tony Wilson is by far the best blocking wide receiver we have. Need proof, watch the block he throws at the :07 mark on an ASU lineman:
Wilson's injury adds to an expanding list of Dawgs who will either be out for a while or miss the remainder of the season. Here's just a sample of the current injury list:
Out for the year: Marcus Washington, Trinton Sturdivant, Jeff Owens, Tony Wilson, Bruce Figgins
Out for a while: Kris Durham, Tripp Chandler
Questionable: Knowshon Moreno, Rod Battle, Dannell Ellerbe
Just Getting Back: Brannan Southerland, Quentin Banks
Many will say that good teams have deep depth and the loss of one player should not make that much of a difference. However, as Georgia fans we do have a couple of instances to point at where the loss of one player really hurt us: 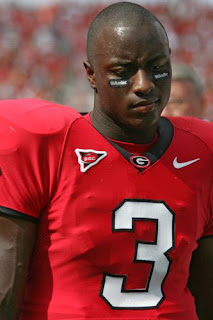 Shockley, just after the ankle injury against Arkansas in '05

Losing DJ in '05 for the Florida game completely changed that season. We lost to Florida without DJ and to Auburn with a still recovering Shockley a few weeks later. The full potential of that team was on display against LSU in the SECCG. Who knows how that season would have finished without the injury.

While losing a defensive lineman is not quite the game changer that losing a quarterback is, I am beginning to think that the loss of Jeff Owens really has shifted the way early 2008 has gone. Without our senior leader in the middle, teams have been able to crack down on Geno Atkins and our ends to keep pressure off the quarterback. Willie's system of soft coverage works well provided you are pressuring the quarterback, but without that force in the middle, QBs like John Parker Wilson and Chris Smelley have had ample time to make their reads. The loss of Ellerbe early last week only exemplified this for Bama.

This off week should allow us to heal some and hopefully we get a full strength Brannan Southerland back for the Tennessee game. We need to send a message that the Alabama game was a fluke and we still are a team capable of playing in a BCS bowl.

So here's my question to Willie - we've known since game 1 that our DE's are not getting pressure. It isn't getting much better (against a good D) as the weeks go on and is a huge weakness considering that f#$%ing soft zone he adores so much. SO WHY THE HELL ARE WE STILL PLAYING SOFT ZONE??? We played right into Bama's hands and will make UT look like a MNC contender if he insists on running that f#$%ing scheme. Pardon my French.

Furthermore, what does it say about CWM's faith in his own coaching ability when he fears the deep ball so much against the very secondary he coaches (his specialty & his line)???

Reading Mark Weiszer's blog yesterday pissed me off even further. Mark mentioned that CMR "bristled" when forced to confront the fact that at least once/year since CWM took the DC job we've defensively allowed an opponenet to run away with the game quickly. I realize CWM is a college friend of CMR's but continuing to defend him and not correct a glaring, annual, and unneccesary humiliation is just unacceptable. And I finally realized that I'm most angry because judging by CMR's reaction to the truth, this situation with CWM's defense will not change anytime soon. Ugh.

Off my soapbox now.

I agree, btu unfortunately this is the scheme he's been coaching. Trying to change it mid stream may have even worse consequences. Either way, at the end of the season Coach Richt is going to have to do some real evaluation of his assistant coaches.

That is the downfall of the run we went on at the end of last year. If the season would have continued badly, we could have fired Willie and picked up Muschamp or Tenuta. Both of them seem to be having good success at Texas and Notre Dame, respectively. I know Tenuta was a Tech guy, but he always gave us fits and is doing a pretty good job at Notre Dame.

But, here's the thing... I don't think CMR will EVER fire Willie. They've been friends too long and I think that had a lot to do ith why he got the promotion in the first place. Ever wonder why Rodney didn't get the job? I do. At least he's proven he can coach his own position. Willie can't do that successfully.

And, while I agree that its certainly a no-brainer we can't completely install a new defense at this point, I do think tweaks can be made, better game-planning should be expected, and adjustments before the half (or before we allow someone to score 20) should be mandatory at this point.

Muscamp and Tenuta wouldn't have been good options mainly because we continually beat them both, and they are grossly overrated.

I'm praying Bo Pelini fails miserably at Nebraska and comes to CMR begging for a job with his homeless family in tow & Dink Nesmith there with an open checkbook. I realize this is a pipe dream, but its either that or I'm gonna be joining AA soon.

Again, love the blog - its a daily stop for me. Thanks for the discussion!

More than a little bit of a stretch to suggest we lost that 05 Auburn game due to Shockley still recovering.

The Auburn game in 05 would have been a different game if Shockley never got hurt. Remember that we hung with Florida the week before with Joe T at QB. Shockley in that game may have led to Georgia to victory. This would have lead to an undefeated Georgia team heading into that Auburn game with all kinds of momentum. And what's to say that with a fully healthy QB, we don't score even once more that could have made the diffence in the game.

I have to disagree Streit. It would be one thing is DJ had struggled, but he threw for 304 yards and 2 TDs. That was a fantastic football game and our breakdowns came in giving up 506 yards of total offense to a physical Auburn team.

I'm going to disagree with all of you. I support Willie and do not think he should be fired.

Streit, why would you want Muschamp? He's 2-3 against us all time, and fell flat both years at Auburn. Sorry, but there's no logical correlation to get rid of Willie for Muschamp.

Bubba, Streit, and the rest of the gang,

Let's look back on that 2005 Auburn game and the last minute performance of Willie's D on that night. They bent but did not break for three downs on the goal line, finally succumbing to the physicality of that Auburn team for a very late fourth quarter touchdown to give the Plainsmen/Tigers/Battle Eagles the lead. Where were the monumental soft-coverage collapses we saw against Alabama on that Novemeber night? Had the D buckled, accepted what was a basically foregone conclusion that Auburn was GOING TO SCORE REGARDLESS in that situation, we might have gotten the ball back with more than eight seconds remaining on the clock. Shockley might have mustered some magic, injured or not, and we may have left that game with a win.

There are two times in Mark Richt's career that particularly stick out in my memory related to poor clock management: both took place against Auburn, both took place Between the Hedges. The 2005 defensive goal line stand and the 2001 decision to run Jasper Sanks at the goal line on third down.