Each year the first weekend of college football brings giant crowds of people to small towns and urban metropolises all across the country. Students have spent the summer miserable at home adhering to high-school-age appropriate curfews, partying and experimenting (ahem…studying) abroad, or fetching coffee and donuts for a mid-level manager-in-training at some company offering internship credit in lieu of an actual academic class. For college town locals, their return to campus is like the first eruption of the alarm clock on the Friday morning following a rough Thirsty Thursday out with the guys from the office. Townies in the sleepy college towns have enjoyed a summer of reduced traffic and unimpeded access to the good bars but are now groggily interrupted from that mid-summer’s night dream. Like the second, or third, or fourth god-awful buzzing of the alarm clock after the snooze button has been hastily punched: fall has arrived, students have arrived, and soon football fans will arrive. 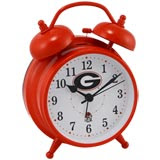 Now, you’ll have to forgive my simile comparing perhaps the most anxiously-awaited weekend of the year to a dreadful annoyance which every slumbering sub-conscious hopes will never come. I love college football and I always wait for the first weekend of the season with bated breath. This year has a particularly appealing beginning as the Dawgs sit atop the preseason polls. However, my preceding comparison gains brevity when you think about the nightmare that will haunt Atlanta when the college football season arrives in 2008.

Atlanta’s size and diversity provide some insulation from the startling buzz of autumn’s alarm clock which rouses football towns all over the country from their metaphorical summer hibernation, but the ATL is still somewhat of a college town. The North Avenue Trade School, Georgia State, Morehouse, Clark-Atlanta, DeVry…with that many “institutions of higher learning” in one city I can’t deny the collegiate presence in Atlanta…not to mention the volume of Georgia grads who make up probably two-thirds of Atlanta’s tax base. On Labor Day weekend the culture clash that takes place here will be intensified beyond the annual struggle of townies to maintain their strangle-hold on traffic patterns and watering holes in other college towns despite the return of students like swallows to Capistrano; this weekend is Bama-Clemsa-Dragon Con. 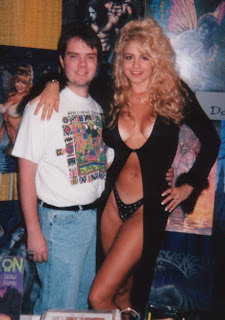 Coming to a convention center near you this SUNDAY, SUNDAY, SUNDAY! Dragon Con!! The only place men this geeky can get close to women this skanky.

This weekend the Chik-Fil-A Kickoff will provide one more weekend of reprieve from the influx of football fanatics to Tuscaloosa, AL and Clemson, SC; the equivalent of the nine-minute interval afforded by the alarm’s snooze button. But for T-townies and Clemson natives to enjoy a quiet Labor Day without RVs, tailgaters, and ticket scalpers they ostracize their legions of pigskin provocateurs to Atlanta to join forces with an entire army of 11-year olds trapped in the bodies of 34-year old IT programmers. While the game on the field should be an interesting contest, it’s the match up of the misshapen retinas that will expand beyond the gridiron.

The Near-sighted vs. the Far-sighted: Dragon Con attendees are idiosyncratically four-eyed. Whether it’s the hours spent in front of a computer screen playing games involving wizards and manna potions or whether it’s the extremely elaborate costume of the Level 17 boss in Final Fantasy XCVIII who actually has four eyes, the attendees of the Dragon Con can be collectively classified as the near-sighted. 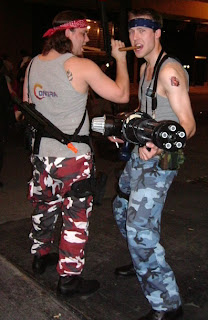 Keep in mind that these clowns are actually adults!

Contrasting the cronies’ ocular deficiencies will be the far-sighted football fans from Alabama and Clemson. Achieving far-reaching visual acuity in opposite directions, the far-sighted football fans can see so far that their vision actually penetrates the time-space continuum. Tide Pride prevents those from Tuscaloosa from actually perceiving the present. As the vision of a T-Rex was thought to be based on motion, the vision of a Tide fan has been thought for years to only work when looking back in time. Alabama football was completely unable to see past the Bear Bryant era for decades. Alabama’s only sight has been hindsight.

Clemson fans and the rest of the ACC are far-sighted toward the future. ACC schools, for the most part, have decent reputations as respectable academic institutions (North Ave. Trade School, UNC, UVA, VT, BC…not necessarily Clemson) and it is the academic strength that I credit with an ACC school’s ability to defray football pressures by looking toward the future and claiming that “next year will be the year.” This happens to Clemson every single year. Pre-season hype about a possible run to Jacksonville, Tampa Bay, or Charlotte in December inevitably turns into some occurrence of Bowden’s Bengals tripping clumsily over Howard’s Rock. And yet somehow the fans, prognosticators, and athletic association of Auburn by the lake find it appropriate to renew Coach Bowden III’s contract. I swear, if Clemson ever finishes second in the ACC they’re going to erect a statue of Tommy Bowden somewhere next to the lake shore, posing with his hand over his brow shielding his eyes from the brightness of the future he will forever stare into, out over the water.

Maybe Bowden's statue could be forever embronzed with this expression?

Fast forward to 2007 and Tuscaloosa’s attempt to secede from the United States to form the sovereign Sabanation. Now Tide fans have evolved to gain the power to look forward into the future and create unachievable and unfounded high expectations, just like Clemson. There should be some interesting conversations overheard at Dragon Con when an orange and purple Liger asks a hounds tooth Storm Trooper how to over-inflate the legend of Danny Ford to match the posthumous stature of a previous Bama coach who shall remain nameless. How long do you think it will take group of Bama fans to corner a wizard with a chemistry set and threaten to hog-tie him if he can’t concoct some magical spell to reanimate the Bear? 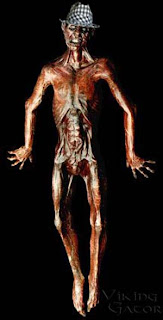 By the way: My prediction for the game is that Alabama will win, stealing the hype and praise from an undeserving Clemson squad and placing it squarely upon their unworthy shoulders for four weeks until their visit to the Classic City. The opportunity for Bama to beat a school like Auburn without having to risk their consecutive-games-lost-to-Auburn streak will motivate the Tide.

Addendum: I wrote the comment about Clemson fans bronzing the likeness of Tommy Bowden in total jest; a sarcastic hyperbole intended to point out the tendency of their athletic association to bask in the glory of early season expectations and somehow stave off paralyzing disappointment and dejection over the results of the season. I meant it as a joke…then I found this.

I'm with you, I took Bama over Clemsux. I'm not driking the orange kool-aid and trust Saban over Bowden in big games.

Clemson has essentially been an average team over the last decade that beats FSU every once and awhile. The link to the statue poll has the most telling statistic as Ga Tech has more ACC wins in the last decade than Clemson - and this Clemson fan is proud of it.

Bubba, Clemson has beaten FSU 4 out of the last 5 years. Problem is FSU isn't the gold standard in the ACC anymore. Or, when they are, they've finished the season 8-4 and have somehow managed to win the conference. The ACC champ has a terrible record in BCS games. For example, Kansas beat VT last year. Kansas.