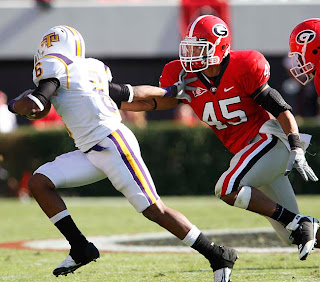 2010 Review:
Robinson became a starter for the Dawgs in 2010, appearing in all 13 games (including 11 starts). Robinson and Akeem Dent formed a good foundation in the middle in the first year under Todd Grantham. He recorded a career high 6 tackles against Georgia Tech.

2011 Preview:
From everything I have read, Christian Robinson has become one of the team leaders of the defense. His vocal leadership, along with solid play on the field, will make him a player to watch this fall. I am really excited about him being paired with sophomore Alec Ogletree at inside linebacker. Look for an increase in Robinson's tackle total as last year's team leader, Akeem Dent, has moved on to the NFL.
Posted by Streit at 8:39 AM

Robinson and Akeem Dent created a fantastic groundwork from the center from the very first 12 months below Todd Grantham
When you have nothing to do or unhappy? What should you do to spend the free time? How about the game? like to get wow gold buy in WOW, and how to have thewow gold buyingwith less money, is there anyway to get the for us? We need to think about this.