The 2006 matchup between the Georgia Bulldogs and the Auburn Tigers had a similar ring to the game that will take place this Saturday. Georgia was struggling with a freshman quarterback under center, having lost games earlier in the season to Vanderbilt and Kentucky. The record stood at 6-4 and the Dawgs were underdogs to an Auburn team that was in the national title race. The #5 ranked Tigers were 9-1 and were looking to reach the SEC Championship game for the second time in four years. What followed was an absolute destruction of the Auburn Tigers. The final score was 37-15 and the game became known as the Massacre on the Plains.

There were many heroes in game, from defensive lineman Ray Gant to quarterback Matthew Stafford. But if there was an MVP award for this effort, there is little doubt that award would not have gone to senior safety Tra Battle. From Mary Parsons High School in Forsyth, Georgia, Battle earned his spot at Georgia the hard way: as a walk-on. During his junior season, he became a starter and was put on full scholarship. The game against Auburn was Battle’s signature moment at Georgia, intercepting three passes from Auburn quarterback Brandon Cox including one for a touchdown. Here’s a look back at his performance:

Following the 2006 season, in which he totaled 58 tackles, Battle was named to the All-SEC first team. Soon after, he was also named a third-team All-American. Despite these awards, he went undrafted in the 2007 NFL Draft. But just like walking on at Georgia, Tra was determined to continue his playing career at the next level. He eventually signed with the San Diego Chargers and made his NFL debut in 2008. After being cut from the Chargers, he signed with the Dallas Cowboys where he spent the remainder of the 2008 season. In 2009, he practiced with the Detroit Lions and later the Cleveland Browns. For his NFL career, he has totaled 15 tackles.

Once again, Tra refused to give up on his dream of playing football. He signed with the Hartford Colonials of the UFL where he recorded 18 tackles in six games during the 2009 season. While his playing career continues, Battle also focuses much of his attention on charity work. Tra’s Battle for Success Foundation, a division of the Athletes for Education Foundation, focuses on children’s education programs in the San Diego area. For the last two years, Tra has hosted “Camp Battle” in Tijuana, Mexico, which focuses on events for children ages 4-16 with mild to severe autism. 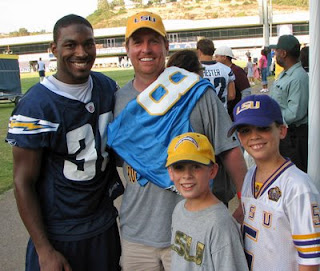 UFL Player Spotlight: Tra Battle
Posted by Streit at 9:30 AM