If You Could Bring One Player Back, Who Would it Be?

The 2009 season will see Georgia attempt to replace a number of proven players in their starting line up. What would Mark Richt do if he could replace one of those holes with one of his former players? Would he pick one of his past quarterbacks to take over the reigns for Stafford, try to replace Knowshon Moreno with the starter before him, or bring back a player to fill the most glaring needs on defense? Here are some likely candidates that Richt would consider: 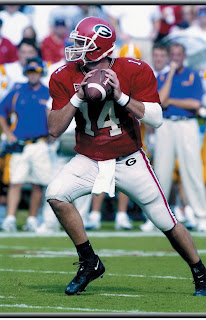 With the prospects of starting a 5th year senior with limited playing time or a true freshman, Richt would be glad to welcome back the four-year starter with most wins of any quarterback in college football history. Greene would bring a calming leadership to the offense and would take advantage of receiver AJ Green with a combination of quick outs and play action passes. 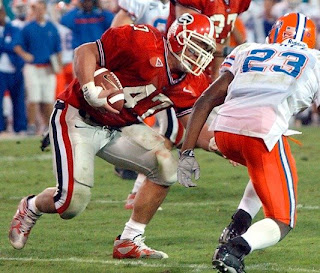 While Justin Houston showed some promise and Demarcus Dobbs made a couple of amazing plays, overall the defensive end position let the Dawgs down in 2008. Plugging back in a three time All-American who is the Georgia career leader in sacks would help solidify the pass rush and bring the fire back to the defense. 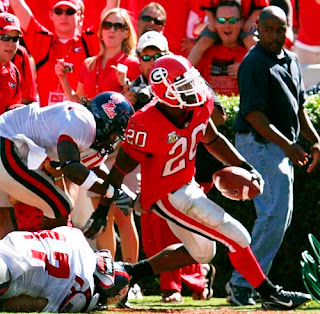 A solid player during his four year career, Brown found great success when paired with Knowshon Moreno during his senior season. Pairing him with Caleb King or Richard Samuel, the Dawgs would have a nice 1-2 punch that they lacked in the '08 season. 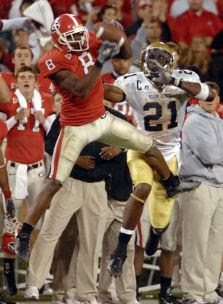 Oliver's career (at Georgia) was cut short when he failed to qualify academically for the 2007 season. After closing the 2006 season by shutting down Calvin Johnson, Oliver had finally reached the potential he showed coming into college. With Asher Allen gone, Oliver would provide experience that is certainly lacking in the current group of DBs. 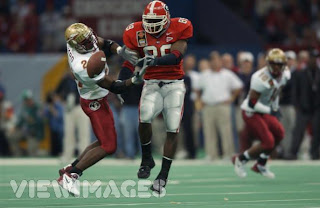 The 2008 season saw the Georgia offense forget what had been a staple of previous Mark Richt teams: throwing to the tight end. Richt's tenure has produced Leonard Pope and Randy McMichael,but the most balanced of the group was Ben Watson. The threat of a pass catching tight end over the middle would help create better match ups for the outside receivers like AJ Green and Tavarres King.

If I were Mark Richt and I had my choice from this list, I would take David Pollack. The chance to team Pollack on a defensive line that already includes Geno Atkins and Jeff Owens would be amazing. The amount of defensive pressure these three would create would generate rushed throws from opposing quarterbacks and seal up holes for opposing running games. Take the survey and let us know which player you would love for the Dawgs to have back.

Great post Streit. With the players to choose from, you would normally have a hard time deciding. But I agree with you, given the total lack of pressure last season, Pollack is a surprisingly easy choice.

Not even a question. Pollack. We weren't able to rush the QB last year. Pollack did that pretty well.

Yep, Pollack. I think the corners and safeties we have now would do great with a little pass rush. When the QB has time to send a couple of texts before he throws it you can't expect our corners (or anybody's for that matter) to cover any WR's for that long. Plus I think Pollack raised the performance level of other players.

But Paul Oliver & Greg Blue come in close a 2nd.

Great post but how could you leave out DJ Shockley, Thomas Davis, Greg Blue, or even Tim Jennings. Been some great players that is tough to call just one but I would say the defensive line is going to be just fine this year. I think DJ, his athleticism, his knowledge, and his leadership, are who I would want in the huddle come nut cuttin' time. If he doesn't get hurt against Arkansas, we stomp Florida and Auburn, and we win the MNC in 2005!

So many good ones though, I would like to bring a bunch of them back.
Man, how sweet would that be?

Marcus Howard, Jeff Owens, Geno Atkins, David Pollack across the front, Boss Bailey, Odell Thurman, and Rennie Curran in the middle, Thomas Davis, Sean Jones, Tim Jennings, and Paul Oliver in the secondary! I am not sure anyone would score against them!

Wait, I forgot Willie would still be running the show so everyone would score!