Imagine a running back from a small Georgia high school who set numerous records during their high school years and immediately Georgia fans will think of Herschel Walker. In a few short years, Dawg fans may also think of the player who broke many of those records, Washaun Ealey. From the Emmanuel County Institute in Twin City, Georgia, Ealey (along with teammate Dexter Moody) became the first commit of Georgia's 2009 signing class. 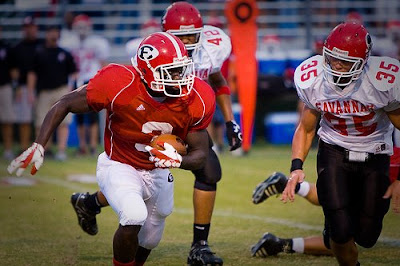 Ealey's stats during his high school career are absolutely staggering. During the 2007 season, Ealey helped lead the Bulldogs to the Georgia Class A state championship. He rushed for 2982 yards (198.8 per game) and 58 touchdowns. The 58 touchdowns broke the single season mark held by former Buford and Notre Dame back Darius Walker (who had broken the record previously held by Herschel Walker). 2008 would see Ealey lead the Bulldogs back to the state title game, however a lingering ankle injury would prevent him from breaking his own records. His 2008 totals include 2825 yards on the ground with 41 touchdowns and 13 receptions for 166 yards and 5 scores. For his career, Washaun set a new Georgia record for touchdowns with 122.
Ealey has good size (5'11'', 205) and has been clocked with a 4.4 in the 40. His video highlights show his ability to both break tackles as well as making tacklers miss all together. The only knock on Ealey is the belief that his gaudy stats were accumulated against inferior competition. The line at ECI was one of the largest in the state (at any classification) averaging over 280 lbs and often created large holes for him to run through. Many have questioned whether he would have the same success in the larger classifications. As all Georgia fans know, Herschel Walker also came from a single A school and he had no problem at the collegiate level.
Here is a video of Ealey's highlights. You can judge for yourself:
With the departure of Knowshon Moreno, the running back position is an open competition. However, with sophomores Richard Samuel and Caleb King with experience and freshman Dontavious Jackson and Carlton Thomas coming off red shirts, I expect Ealey will be red shirted this fall.

There are actually a couple other knocks on Washaun.... he may or may not qualify and he lacks breakaway speed. He should be solid by his rs soph or junior year tho

I've seen Washaun play a couple of times and he was not the same player this past year as he was as a Junior. I think he has enough speed to do well at the next level but the biggest test will be how he matures while at UGA. Injuries took a toll on him this past season and he didn't have the same burst at the line as in 2007. If he can recover this burst and get used to playing more than 3 yards behind the QB, he could be a major contributor by his second, most likely 3rd year. I am always wary of how a Wing T/Veer RB/FB can handle blocking assignments at the college level.

Ultimately, in my opinion and no knock on Ealey, Dexter Moody was the most impressive athlete on that ECI team.